Have you ever been ambling down a leafy street in the (former) shanghai’s French Concession, sipping on a baguette and munching on a glass of Bordeaux, and found yourself wondering, “‘hang on a minute… why is there a French concession here anyway?”

France never colonized China. They fought a wee war in the late 19th century, but that was over a part of Vietnam, nothing to do with Shanghai. But for almost 100 years, France governed a large part of one of China’s most important cities. To understand why you need to understand a little bit about how China and its relationships with history’s classiest villains; the British.

In 1839, Britain invaded China with the express purpose of forcing drugs on them. (Editor’s Note: It’s bad manners to explain a joke, but there’s a belief in some cities that shoes tossed over a cable mean a drug dealer works nearby. Do with that information what you will.)

Britain had been gobbling up Chinese tea with a voracious appetite since tax was reduced in 1784, and their trade deficit with China was running the behemoth British East India Company into the ground.

To restore the balance, they needed China to start buying things from Britain, but China didn’t really want any British goods.  The Qing dynasty, which viewed itself as the center of the world and the benchmark of all civilization, was thoroughly unimpressed with anything these foreign barbarians had to offer. But Britain did have one thing; opium. Die-hard stoners who missed the news about Yongkang Road.

Britain was making a fortune growing opium in India and then shipping it to China. China wasn’t one bit happy about this. Opium addiction was running rampant and by 1838 there were up to 12 million Chinese opium addicts. Tensions were further exacerbated by the refusal of British trade envoy to acknowledge China on its own terms or obey all its laws.

Over 20,000 chests of opium were confiscated by the Qing authorities, who then proceeded to publicly incinerate it in Guangzhou, in June 1839. It must have been a better party than the one in Boston involving Tea, but the British were nonetheless unamused. They’re very picky about people destroying anything tea-related.

They decreed a royal ‘Fuck You,’ and invaded.]

And so the First Opium War began. Understandable, given their general feelings about a destroyed property and open rebellion.

With vastly superior technology, including warships that could drive against the tide and soldiers equipped with modern rifles, Britain won an easy victory and forced upon China the first of famous series of ‘unequal treaties.’ They made China open up to trade, pay tribute to Britain, and began the process that leads to the creation of several British foreign concessions across China. The treaties forced on China by the British were later referred to as the ‘unequal treaties,’ and were used extensively to build up patriotism at the start of the 20th century.

Britain and the other foreign powers, like America and France, wanted to be able to govern their open people in China. Being, as they believed, from superior European civilizations, they thought only Christian laws and jurisprudence could maintain order.

Not the part about Europe being superior, of course. China, an ancient civilization that for a good long while looked like it was going to dominate the entire planet (maybe if the Hongxi Emperor hadn’t burned down the greatest fleet in the world in the 15th Century), felt that the European settlers and traders couldn’t possibly understand the sophistication and subtlety of Chinese law and culture. It was going to be far too much effort and frustration to tame the barbarian laowais, so China wanted the foreign powers to jolly well to govern their own ruffian citizens, thank you very much.

The Chinese leaders also believed that if given the chance to observe the Chinese way of life the foreign barbarians might acquire some semblance of culture and civilization, and maybe even become assimilated!

Did it work out? Too early to say.

So, Britain would get its concession. But aren’t we talking about France here? The Old French Consulate, in Shanghai, 1913

Here’s where things get really interesting. The unequal treaties contained a ‘Most Favored Nation’ clause. This meant that whatever concessions Britain got China to agree to, France, America and other foreign powers would get them as well.

The classic interpretation of this is that China was so weak and humiliated that they had no choice but to bow to the great powers, and grant matching concessions with no room for negotiation. Diplomat and former USA national security advisor Henry Kissinger was instrumental in the opening up of China during the final Mao years. Also famous for the quote
“Power is the ultimate aphrodisiac.”

Who was screwing who?

It was a classic case of China setting up a game of laowai vs. laowai.

For two thousand years, China had maintained the continuity of its vast civilization across many dynasties by following the principle of pitting barbarians against barbarians, a strategy China would continue to embrace throughout the communist era, balancing the Soviet Union against the United States.

When foreign powers threatened, China would play them off against each other, and then try and gradually assimilate them into Chinese civilization when they weren’t watching. This way, despite its military weakness and the rule of foreign dynasties like the Mongols, Chinese culture and civilization had survived. Bet that hot water drinking habit and how good you’ve gotten with chopsticks doesn’t look so innocent anymore, does it?

To prevent Britain from getting too firm a foothold in China, the Qing Dynasty gave equal concessions to their rivals. China would rather have to deal with 5 squabbling invaders competing with each other than one concentrated force.

Out of the principle of pitting laowai against laowai, the French Concession was born.

From 1849 until 1943, France had its own little slice of China, specifically set up so that the UK wouldn’t have a monopoly. When France was itself defeated (by the Nazis), Vichy France handed over the keys of the Concession not to China, but to Japan, which was running amok in Shanghai. Shanghai would have to wait until the end of the war to finally regain total control of its own territory.

These days the French concession is of course 100% China-owned and operated, but it still maintains distinctly Parisian features such as overdressed fashionistas pretending to enjoy oysters, drunk Englishman demanding chips from bemused locals, and even the occasional decent cheese platter.

So that’s the alternate history of the French Concession. China, by using the foreigners’ own equality clause against them, managed to make sure that, despite winning two wars, Britain would have to spend as much of its time worrying about the French as it did about the Chinese. After all, if you ever need to throw a wrench in whatever the British have planned, just insert the French. 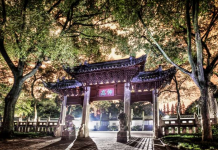 All You Should Know About Confucius Place of Worship