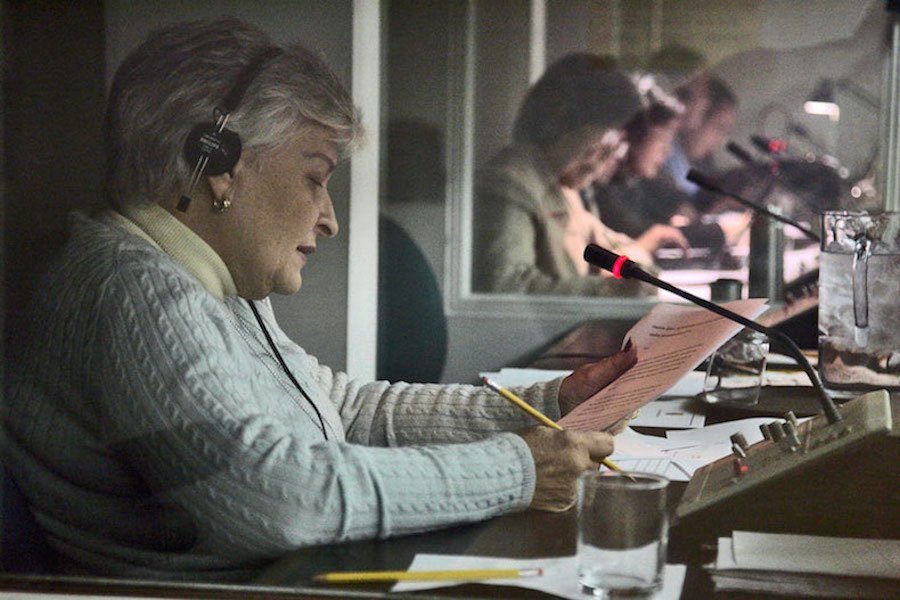 In recent years, TV drama playwrights in China are running out of stories illustrative of domestic life and are shifting focus to professional life. The burning hot TV show “Les Interprètes” (The Interpreters in French) features elite French interpreters at GIIT/SISU (Graduate Institute of Interpretation and Translation of Shanghai International Studies University).

Starring Yáng Mì and Huáng Xuān, the show has received (almost) as much praise as critique nationwide. Meanwhile, professional interpreters who usually stay behind the scenes are now in the center of the spotlight. We had the honor and pleasure of sitting down with Professor Harry Dai of SISU/GIIT, who has been working for the UN, EU, IMF and other prominent international organizations. We asked him to guide us through the misty village of high-end interpreters by comparing and contrasting the show and reality, hoping to learn what it is really like to be an interpreter. The plot of “Les Interprètes” made ridiculous mistakes, but at the same time, it paid attention to details that could be overlooked by a layman. In one episode, the interpreters swaggered across the conference room and slid into their booth while the audience and speakers waited, smiling and patient. Throughout the interview, Prof. Dai and I tried to verify the truthfulness of different facets showcased in the TV drama. So how important is punctuality?

Prof. Harry Dai: Utmost. Interpreters usually arrive 15 to 30 minutes in the booth prior to the start of a conference. Punctuality is a fundamental quality of this profession.

Z: There was a scene in the show where the head interpreter at length warned against usage of perfume—even real-world professionals thumbs-upped this attention to detail. Is it true that interpreters shouldn’t wear perfume at all?

D: There is no specific rule about that. However, interpreters are indeed urged to dress on the conservative side for professional considerations. The background setting is also quite fascinating: of all the places in Europe, the show selected Zürich, a German-speaking city as the hub of personal and professional activities for the French-Chinese interpreters. Presumably, Geneva or Brussels wasn’t available for filming, but setting the show overseas definitely resonates with Prof. Dai’s own career path.

As a senior interpreter who started young at the UN, Prof. Dai thinks that, unlike in a national government, “with international organizations, there is this sense of camaraderie which speaks to my professional contentment. Many Western interpreters work in this field for life, and so you really start to know your teammates and feel a strong bond.” The thought of “interpreting for life” reminded him of something important, and so he went on to speak about the big choice he made: to remain an interpreter.

The Chinese title of the show is “fān yì guān,” with the first two characters meaning translation and “guān” meaning government official. Ironically, there is no such position in reality, and this creation precisely reflects a worrisome mentality of the Chinese interpreters.

Prof. Dai: As the Chinese saying goes, becoming an official is the highest achievement of any man. Officialdom is so prevalent and fundamental that the majority of high-level interpreters sooner or later “step up from” interpretation and into governmental positions. In fact, some of my interpreting classmates have now graduated into officials, ambassadors, etc.

Every qualified interpreter does preparation in at least two phases. One, to attend a training program as a student; two, to prepare for a conference as an interpreter.

The GIIT/SISU described in “Les Interprètes” is a real, prominent interpretation training institution in Shanghai. For one thing, our protagonist Qiáo Fēi persistently declares her greatest ambition to be an admission ticket to GIIT/SISU.

Z: Is the institution where you hold your tenure, GIIT/SISU, highly competitive to get in?

D: Indeed! And those who get in are not guaranteed a diploma. We admit the best, and award the very best.

*Side note: I later read through the admission history and discovered that the admission rate of the Conference Interpreting Program at GIIT/SISU is extremely low at around 6%, similar to that of a Harvard undergraduate class. Annual admission is capped at 10 heads, and not every student makes it to the second year, let alone graduate.

As intern trainee and intern trainer at GIIT, the two protagonists in “Les Interprètes” spent a considerable amount of time together, preparing for events varying from tour groups to international conferences. Adorably, their long hours together doing prep work sparked chemistry between the two. I didn’t ask about that part of the job.

Z: What is pivotal when an interpreter prepares for a conference?

D: An interpreter should be immensely curious about every aspect of the world because learning about new things is what an interpreter does non-stop. In fact, one reason why I enjoy my work is this constant exposure to cutting-edge topics. Sometimes, having interpreted at dozens of conferences on the same topic, you become a semi-expert in that field.

In the show “Les Interprètes,” the charming female protagonist and intern at GIIT, Qiáo Fēi, is excellent in French but lacks much practical knowledge—or in a more French way, savoir-faire—on diplomatic occasions. However, she is curious about everything and not at all terrified of making mistakes, a bit of a daredevil, and this curiosity about unknown fields is the defining quality of interpreters.

Z: What help do you get during the preparations?

D: Internet has made things a bit easier than before. Also, contrary to common belief, we don’t work on our own—conference organizers play an essential role assisting our work. We cooperate very closely with them in hope of receiving background materials and speech scripts as early as possible. Good collaboration enables sufficient preparation and thereby quality interpretation. This also explains why interpreters are punctual—sometimes we don’t receive the scripts until a short while before the conference, and so we need that half an hour in the booth to prepare. After extensive preparations over the years and before each conference, interpreters are in place for real work. Critics say that the show depicts interpreters’ working conditions unrealistically: the booth is far too comfortable and the speed of speech far too low.

Z: What is the regular speed of a conference speech?

D: To take the UN for an example, the speed of delivery has increased over the years, mainly because of the surge in the number of member countries plus the shrink in financial resources, and hence the meeting time. With every delegate having much to say in a smaller time slot, speakers have to hurry, and doubly so for interpreters.

There are two legendary halos around interpreters: they do simultaneous interpretation; they speak several languages like—or even better than—native speakers. In “Les Interprètes,” the tall, tan and handsome intern trainer, Chéng Jiāyáng, could translate flawlessly between French, Chinese, and English.

Z: Simultaneous interpretation—how on earth do you accomplish that?

D: This does not come without very hard work. Students in our intensive conference interpreting program to arrive at 7 AM and leave reluctantly at 10 PM, pushed out by security guards who need to close the building for the night—and this lasts for two years. However, take note that even top-tier interpreters won’t be able to simultaneously interpret well a written speech—an improvised speech, yes—but no, not a written one. Written speeches are deliberated upon, condensed and rhetorical. Not exactly a fair game for interpreters who cannot even see the script.

Z: How important is it for interpreters to be multilingual?

D: Not that much. From what I see it, the multilingual ability would be valued much more in professions other than interpretation. We want the depth, not the breadth. Being able to get around in a restaurant with six languages does not yield benefits in this field. If time allows, you could gladly explore more options, but by spreading your efforts, you unavoidably devote less time to your main working languages and improve not as fast as your peers. This is something potential interpreters should beware of.

Z: What advice would you give to students aspiring to become an interpreter?

D: Firstly, one should acquire solid language skills. Trainees in interpretation no longer have much time to overcome language deficiency—their energy is largely invested in acquiring interpreting skills and keeping abreast of all sorts of world affairs. Secondly, one should stay curious, always. Finally, and very practically, one should work hard to get into a serious graduate program.

The show may not have been the most realistic depiction of working conditions, more of a sanitized view of a challenging but very important goal. Think of it as a sports or corporate drama; it may not have the nuance of the real thing, but at least it brings a spotlight to a profession that has its own heroes, usually invisible to the world. In this case, they’re the ones sitting in the booths while the cameras are focused on the stage, making sure the speaker is actually understood and the message is communicated. I say they deserve a little attention and glamor.

Ultimate Guide Of What language is spoken in shanghai?