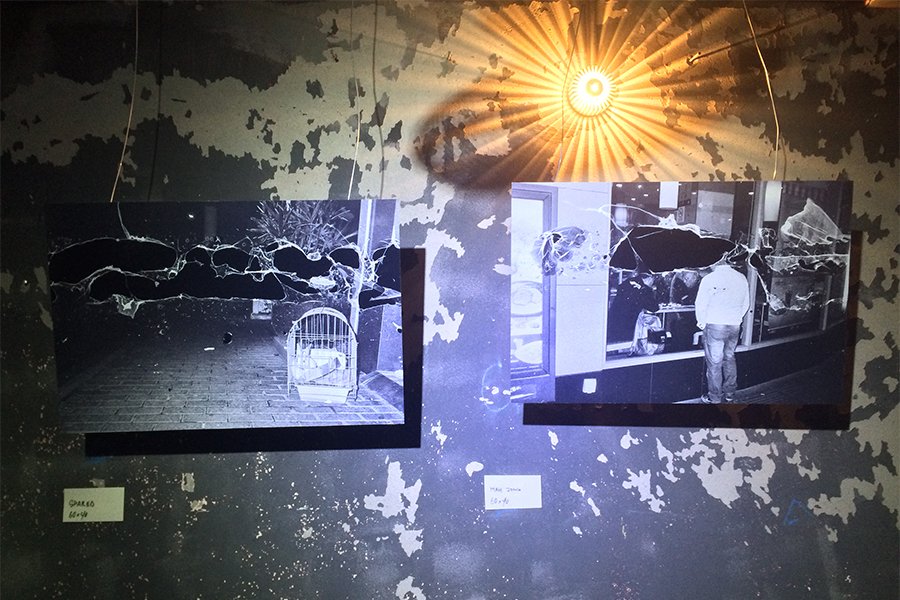 People throw around the label ‘happy accident’ either in the event of an unplanned but welcome pregnancy, and somewhat less often when it comes to unplanned but welcome art. You could say Gabriel Gauffre’s series of photographs named ‘Brulures’ (French for ‘burn’) earns the label in the context of art. Or both art and pregnancy, if you want to get super metaphorical and artistic about it.

Then again, ‘accident’ implies that there was someone around to fuck something up in the first place. In the case of Gauffre’s photographs, on display at Basement 6 Collective until Feb. 5th, no one quite knows which blessed idiot is at fault for the accident that gave birth (see, metaphor) to this exhibition. At the heart of many art exhibitions sit some big idea, cooked up by some crazy artist, with some particularly crazy thing to say—and they’re lucky if anybody gets it. But every now and then, the art happens on its own, and then speaks for itself. Sounds crazy, right? The anticlimactic story behind Gabriel Gauffre’s mysterious series of burned photographs might help explain.

Gauffre worked for years as a professional photographer, only to find himself, as many photographers do, in a steady but soul-crushing, passion-killing (I’m paraphrasing here) gig. On a whim, he quit his job, bought a cheap point and shoot film camera, an even cheaper roll of film, and tried to rediscover photography as a hobby. When he got his film back from the lab, he found it torn, cracked, and burned. Film scans translated the ‘flaws’ into stark black holes outlined by white wisps, like licks of fire, and ghostly webs of film flesh pulled across subjects. No one knows what happened with Gauffre’s film. Not the film manufacturer, not the photo lab, and not the many other photographers that Gauffre has shown the film to. The burns are a spontaneous one-off that no one, as far as we know, can reproduce—and even Gauffre has tried.

So his ‘Brulures’ exhibit comes from the pictures where these ‘happy accidents’ seem to have something to say or do. And every viewer sees something different.

Or painfully the same (‘Conceded’).

Some chatty subjects are silenced (‘Muted’). While others are set on fire (‘Ground Control’). Maybe you just see a good example of why digital might be better than film.

With analog, you get a mass-manufactured can of light-sensitive, chemically treated plastic film, and then you do a lot of praying. You pray to not fuck uploading the film into your camera. You pray that your camera and the can the film came in don’t leak any light onto the film. You pray that the lab you send your short film doesn’t fuck up developing your pictures.

Most of the time, when you finally see your pictures, they come out fine. Every now and then, though, there are scratches, dust, streaks, and light leaks. Gauffre’s case is a bit more extreme, of course, but the point is—film photography lends itself to less control.

With film, you take what feels like a good picture, and then there’s nothing you can do until you get the film developed. That’s in stark contrast to the digital age of taking, checking, re-taking, re-checking, re-taking, and then photoshopping for hours on end—playing God with a mouse to mold a ‘perfect reproduction’ of reality, after auto-matte and airbrush. Granted, film photography isn’t immune to the same deceptions, but they’ve never been more widespread and accessible since the dawn of digital.

Digital photography has its merits in a market economy where the pursuit of perfection is the product, to the point where, one day, buttholes, to pick a random example, might be a thing of the past. Until that day, whether it’s the day the human race goes extinct and all mention of buttholes gone with it, or the day that people sew their buttholes shut and instead drain waste out of a discrete evacuation duct with a detachable, self-cleaning, USB-chargeable Gucci tube…until that day, whenever it is, there’s plenty of room for imperfection.

You might see these pictures and think, “Well, those are some burned photos, and they look pretty cool, but otherwise I don’t see the point.” And that’s completely understandable.

But maybe don’t just stop there. Make something up that feels right. Close an incomplete circle with your imagination, however, you like. To Gauffre, he says they tell him to keep shooting. What do the burned photos say to you? How to Make the (Stupid) Air Conditioner Work in Winter