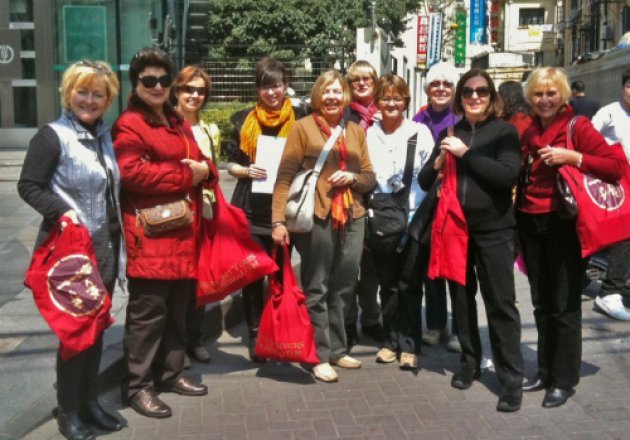 Spring Festival is fast approaching, and that means it’s time to ask that question everyone in China asks themselves at this time of year: stick or twist?

The holidays are a great (or, if you work for an old-school Chinese company, only) opportunity to travel, but trying to fight your way across China during Chinese New Year can be incredibly stressful, and expensive! To give you an idea of how crazy it can get, trains in China are already pretty crowded at the best of times, but during the Spring Festival there are ten times more passengers than usual. (If you’re thinking of going on a trip, watch out for our Chinese New Year Survival Guide, which we’ll be releasing soon and will have lots of useful tips for how to get tickets, dodge the crowds, and avoid getting fleeced over the holidays.)

If standing for a ten-hour train ride and paying double the usual rate for a hotel room isn’t for you, a Shanghai ‘staycation’ can be a good alternative. A free week here gives you the perfect opportunity to get out of your usual bubble and finally visit those museums and sights you’ve been thinking about going to for months.

One of the best ways to do this is by going on a walking tour. Like any major city, Shanghai has its fair share of rip-off merchants charging tourists $200 to walk around the Bund and Yu Garden, but there are also some truly excellent off-beat tours that will introduce to a whole new side of Shanghai. (These alternative tours also have the added advantage of staying away from the holiday crowds that flood the tourist trail at this time of year.)

Here are five recommendations for your New Year itinerary: This is a really fun experience that introduces you to Shanghai’s underworld past and the colorful, sinister, eccentric characters that used to run the city’s opium dens, casinos, brothels, and pretty much everything else during the Roaring Twenties and Thirties.

The tour is also given a fun twist by its interactive nature – along the way, you’ll be taught how to cheat at cards, steal a crate of opium, pick a pocket with a pair of chopsticks and for a little extra, you can even stick around for a ‘cops and robbers shootout’ afterward if you want.

The tour also includes a free drink at Sasha’s (a former mansion in the French Concession that was once home to T.V. Soong, Chiang Kai-shek’s brother-in-law and finance minister), so it can be a fun way to get your night out started in the afternoon, just like the gangsters of old Shanghai. One of the most interesting, but least-known chapters in Shanghai’s history is the story of the Shanghai Ghetto. By the late Thirties, almost every major country had closed its borders to the flood of Jewish refugees attempting to escape the horrors of the Nazis. But thanks to the confusion reigning in the city at the time, Shanghai was one of the few places for which it was still possible to get a visa, and over 20,000 Jews are thought to have fled to Shanghai as a result.

Eventually, the Japanese completed their takeover of the city, and in 1943 (after intense lobbying by the Germans) Shanghai’s Jewish refugees were confined in a small corner of Hongkou district, where they lived in severely cramped conditions for the rest of the war.

Dvir Bar-Gal – an Israeli journalist and photographer – has been running a fascinating around this former ghetto since 2002, where he shares his in-depth knowledge of this unique story. A must-see for history nerds or anyone curious to find out more about Shanghai’s history.

Price: Enquire for details
Duration: Half-day or full-day depending on your preference
Website: www.shanghai-jews.com Janny Chyn is a true Shanghai culture vulture, and her company Shanghai Pathways offers a jaw-dropping 90 different tours and activities around the city.

Many of these are worth checking out, but my favorite has to be the ‘Lost and Forgotten’ tour, which takes you to some real hidden gems in the Old Town. Just a stone’s throw from the hordes shuffling around Yu Garden, you’ll be able to explore some beautiful, secluded former courtyard houses, and snap some fantastic photos of these atmospheric, dilapidated old mansions. The beauty of this tour is, it could actually save you money! Shopaholics Suzy and Lynn have spent almost a decade scouring Shanghai’s markets for the best deals, and they have a treasure-trove of useful hints for people like me whose bartering skills still need a lot of sharpening!

As well as being a lot of fun, this tour around the Fabric Market can also be very useful if you’re thinking of getting some clothes tailor-made but need some advice about how much you should expect to pay, and how to find a good tailor using quality fabric.

Price: 500RMB per person
Duration: 09:30-12:30 every Tuesday and Thursday (unfortunately this tour doesn’t run during public holidays, but the week either side should be fine. You may also be able to arrange a private tour during the Spring Festival week.)
Website: www.shoppingtoursshanghai.com If you’re still quite new to street food in China, food obsessives UnTour will take you around some of the city’s best night markets to introduce you to the tastiest morsels Shanghai has to offer.

Lasting up to 3 ½ hours, you’ll have plenty of time to stuff your face and explore far beyond the xiao long bao, as well as quiz UnTour’s veteran guides on any aspect of foodie culture in China. So there you go – four feasts of culture (and one literal feast!) to nourish you through your Shanghai staycation!

If you have any other recommendations for interesting stuff to check out during the break, make sure to let everyone know in the comments below!

29 places you must go when travel in shanghai

Picture Hang Solutions:Why you Should Using a Photo Display System