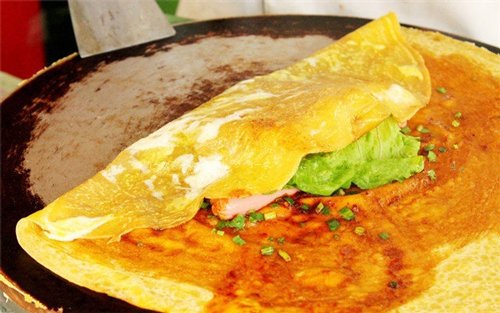 Welcome to 2020! A good year for gastronomers (yummy) in China! Life on the streets remains hard and fast, though. Only the thorniest of street urchins survive. But just because you’re a grizzled, dirt-shoed urban warrior doesn’t mean you can’t taste luxury on the move! Check out the first five of our ten picks for the yummiest munchies for the smoothest hustlers. One or two pork moon cakes make for a decadent power snack in between meals, with its 3:7 fat-to-lean pork interior seasoned to the perfect balance between saline and sweet, much lighter than a tiramisu.

Its exterior is called sū (酥), describing both the layered dense crust and its airy and dry texture, somewhere between a puff pastry and a McMuffin. One pork moon cake at Shanghai’s Guāng Míng Cūn (光明村) costs only 4.50 RMB. The real test is on one’s patience, the will to line up for hours on end for, more often than not, a much-justified bulk purchase.

What Laowais Say: “It’s not oily. Not too salty, not too sweet…” “Eat it fresh!”
What Locals Say: “Line up like mad dogs every year.” “Great gift to give friends.” A sticky rice ball is a mini buffet with boiled eggs done in one of three ways. Your choice! This will be splitting hairs, but I’m decidedly ranking the salted egg yolk above the marinated lŭ egg, simply for its unusual grainy texture. The best deal, of course, is to get them both for 8rmb, so long as you avoid the deep-fried hŭ pí egg, whose fried exterior stretches like overdone tofu skin when one eventually (unfortunately) gets to it.

Rice balls predate and outsize sushi by a magnitude of three at least, and a single one of these starts at 4.50 RMB. That is to say, it already comes with crushed, chewy pieces of fried dough and pickled greens inside, blending well with calculated scoops of wet minced pork and its dry counterpart, salted and pulled out like silk strands.

What Laowais Say: “As heavy as I was expecting…” “Cement brick dropped straight into your gut.”
What Locals Say: “Total bang for your buck.” “Bùcuò (Not bad), not a long wait.” Shanghai’s signature soup dumpling needs no introduction. The delicate, bite-sized little steamed dumpling, filled with juicy bone broth soup and a little nugget of pork or crab, can be gotten for as low as 9 RMB per dozen at one of the hundreds, if not thousands, of curb-side eateries. But would it surprise you to know that mushrooms, tofu, and green veggies, skillfully seasoned and enveloped in a centimeter-thin skin folded 24 times, knocks your micro-universe out time and again?

This vegetarian special is new on the scene, only served to VIPs with minimum spending of 80rmb/person on the third and top floor of Nán Xiáng Mántou Diàn. That’s if you’re not interested in the restaurant’s signature pork and crab yolk “xiăo lóng” drowned in high broth, at 55rmb per half-dozen. That’s a lot to shell out for what’s usually a 10 RMB per dozen deal, definitely worth a try, but judge for yourself whether you buy into the hype.

What Laowais Say: “Difficult not to poke through the skin with chopsticks.” “Absolute favorite.”
What Locals Say: “A bit sweet, more to Suzhou’s liking than Shanghai’s…” “Too expensive.” You might need healthy guts to handle Chinese puff pastries, as they are smooth like lard but demanding when it comes to space. Between sips of cleansing black tea, each delicate bite should start with a flaky outside that crumbles and vanishes in your mouth like macarons, a texture made possible by the lard kneaded a thousand times and over into the dough.

To follow, the inside is al dente, a combination of toasted and ground beans, nuts, and honey. Holy honey (and sometimes sugar)!— Even pork-based Chinese pastries, such as chā shāo sū and xiè ké huáng, end up being more sweet than savory.

What Laowais Say: “Moist but not runny, sweet and savory. I like inside.”
What Locals Say: “The butter brushed on the outside make them better than moon cakes.” There are very few things more pleasing than when the yolk of a lightly fried egg runs and mixes with Chinese sweet sauce, melting together in your mouth against the chewy dough, with a bite of scallions. Mmm… I say, what a treat for breakfast! And it is perhaps the best deal you can get, at 4.50rmb each and 4rmb without eggs.

The crêpe is made out of cornmeal, millet flour, wheat flour, and even buckwheat. And for an extra 0.50rmb, you can keep adding eggs or other ingredients as you wish. That means this street-cart favorite is as healthy as you make it.

What Laowais Say: “It’s like a crêpe-burrito…a crêpurrito, if you will, but really not filling.”
What Locals Say: “So-so, so-so, compared to the originals in Beijing.”