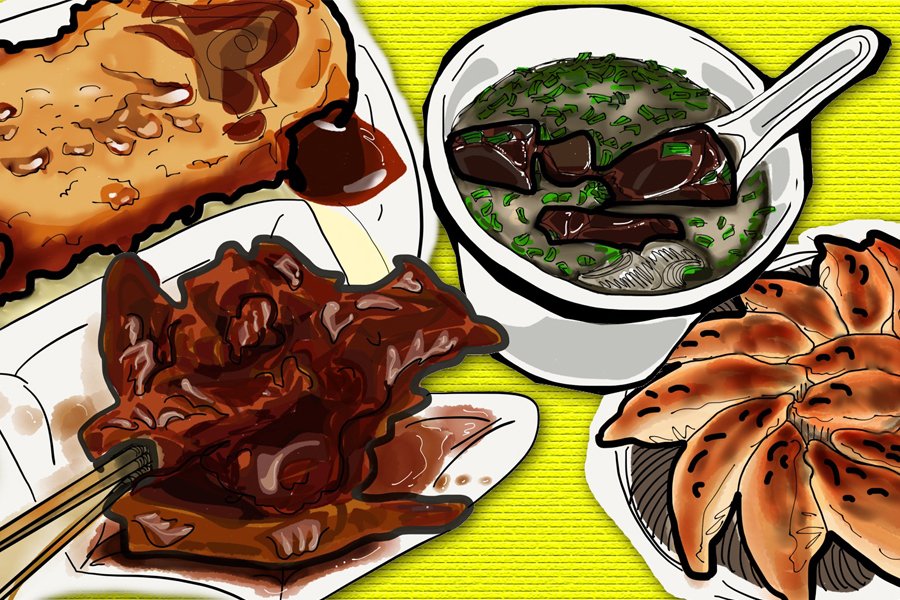 Those of you out there traversing these perilous streets, looking for food befitting of a hard meat urban ranger, but with better taste than Bear Grylls, we are here for you. And so we conclude our street snack epic with Quintana’s last five top street snack picks. One blob of pork sparerib, and two oblong stretches of glutinous rice cakes. Not aesthetically pleasing, but these deep-fried suckers melt in your mouth like s’ mores charred right, with a be-dazzling sweet brown dressing like that in Peking Duck or Japanese teriyaki. Some like it spicier and others sourer, but Shanghai’s collective preference for honey-sweet dominates this high-protein and fat-filled dish. Biting into the crispy golden exterior, you should find the inside of both ribs and rice cakes al dente. Originally, back when oil was a luxury instead of China’s number one public enemy, the ribs were coated in a thin layer of salt instead of Westerners’ favorite food scrap, breadcrumbs. Back then, they probably tasted much more Chinese with much fewer calories.

What Laowai’s Say: “Where are the veggies?”
What Locals Say: “The rice cake bounces off your teeth. I mean al dente.” Beating out KFC by miles and miles, Auntie Qiao Ling’s fried drumsticks skip the breadcrumbs and dive into a bucketful of sweet and spicy sauce! First sliced three or four times across and then fried for thirty seconds, the skin eventually turns golden and crispy all on its own. Each nugget then rolls in a red bucket of sauce, which does three things: saves the fried skin from being too coarse, takes out some oil, and brings the taste to the next level.

Enveloped inside is white meat, both tender and chewy, again superior to their dry counterparts from the Western world. And unlike Xinjiangnese mutton skewers with heavy cumin seasoning, these reflect Shanghai’s preference for that honey-sweet taste.

What Laowai’s Say: “Fast and furious, and very dirty.”
What Locals Say: “We watch drumsticks slowly turn into just wingtips, though the price stays the same. TSS.” Blood soup is short for chicken and duck blood soup, though you won’t be able to tell whether it’s chicken or duck or pig, and they can honestly fool you with any old jello. Coagulated dark red cubes the size of your thumbnail swimming in a saline clear soup— that’s the essence of this dark (editor’s note: in more ways than one) dish. Each cube looks like tofu but pops at your first bite like mushrooms, melts at your second, and slides like spring water down your throat, quietly leaving an aftertaste of slightly sweet iron. According to Traditional Chinese Medicine, like re-plenishes like, so their blood replenishes yours. Juicier, thicker skin, and a fat bottom fried to golden orange— that is a pot-sticker compared to its nephew xiăolóngbāo (小笼包), or soup dumpling. However, compared to its heavy step-cousin, the steam-fried bun, it is much less filling with considerably less meat.

Weekday lunches and weekend brunches are the best times to visit Èr Liăng Bàn (二两伴), as fresh is best and fresh off the wok gives you the sensation of a tongue-burning, soul-warming first bite. At its best, a potsticker should have chewy and almost elastic skin, but when done poorly or left out too long, it’s cold, sticky and raw. With black sesame and tiny chops of spring scallions sprinkled on top, these are treats amongst treats when cooked right.

What Laowai’s Say: “Do I have sesame on my teeth?”
What Locals Say: “Egg, porridge, and four pot-stickers makes my morning.” Its thick doughy body holds around the exterior, fluffy and al dente. Its pan-fried crust is charred on top and audibly crunchy, in contrast to the mellow and soft body. A bang for your yuan, these start at 2rmb for four fatties off the streets. Eight of them really make a decent lunch for any guy or gal.

Since the 1990s, when an anonymous cheapo swapped the handful of black sesame sprinkled on top with white ones, the reputation of this soul food was regrettably damaged in most restaurants that followed suit. Some places have their shēngjiān packing more broth than meat, their skins relatively thin and sagging, failing to keep up the integrity of the iconic round shape. Along with all of that, the traditional half-leavening technique is now only preserved, and nicely so, by Shanghai’s Dōng Tài Xiáng (东泰祥) hence the endorsement. The Intangible Cultural Heritage Protection Project of China agrees with us.

What Laowai’s Say: “Not as oily as you sometimes expect from dim sums.”
What Locals Say: “I’m on a diet. The dough is a little too heavy.”

So there we have them! The Top 10 Shanghai Street Snacks. What do you think, do you have a favorite snack that we missed out? Do you know one snack that surpasses all these? The one snack that could put all other snacks to share?

Top 20 Things To Do During a Long Layover In Shanghai