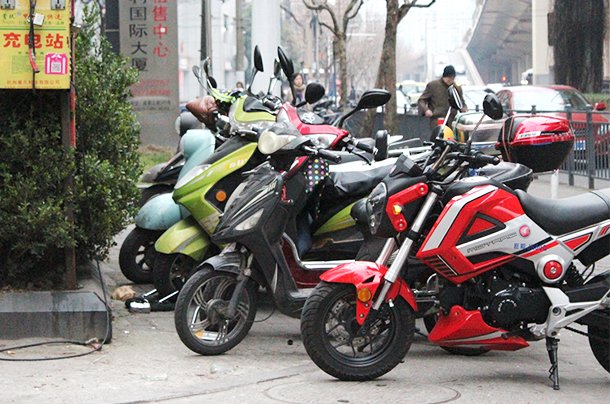 Electric bikes (e-bikes) are by now one of the most popular ways to get around Shanghai. The fact that you don’t need to have a driver’s license helps. If you’re thinking about joining the horde of plug-in crotch rockets, you might be wondering what rules and regulations come with the territory.

Or, more likely, you’re thinking, “Hah! Rules? My blazing chariot is too fast for the laws of man,” and you’ve got a point. The city’s enforcement of e-bike laws, among other laws, is inconsistent, to say the least. Still, a little knowledge of the law doesn’t have to slow you down. In fact, it might keep you rolling if you’re unlucky enough to speed on a day someone in a uniform decides to do their job. In China and probably the world in general, you can get away with a lot so long as you don’t risk other people’s lives. You can keep that in mind when you’re driving your e-bike through Shanghai, but there are some (sort of) hard-set rules, too, that (usually) involve some (fairly) consistent fines. In general, if you ever get pulled over it might be worth a shot negotiating the fine a bit. A friendly smile and a cooperative attitude won’t hurt. At the end of the day, the laws are kind of decided by those who enforce it.

So let’s get the money-talk out of the way first.

Most fines are between 5-50 RMB fines, for things like
-driving at night without headlights
-running red lights
-stopping in a crosswalk
-riding with an adult passenger
-driving the wrong way on a one-way road
-driving in car lanes
-driving on roads where e-bikes are not allowed.

Yes, that’s right, there are some roads where e-bikes aren’t officially allowed.

Some notable roads: Nanjing Xi Lu, Huaihai Lu, along with any elevated roadways that don’t have bike lanes, and most roads underneath elevated highways.

What? Registration, you say? That’s right.

So you don’t need a driver’s license for an e-bike, but you do need to get it registered. Registration is legally required and cheap (around 10 RMB). Still, you might hear that it’s common for people to have no problem never registering their e-bike. If you do get caught, though, the fine can run 50-500 RMB, and they might even confiscate your bike with a 50 RMB/day impounding fee.

If you decide that e-bike registration is worth it, you can register your e-bike at any of the service centers in the city. You’ll find them in the image below. The process is quick and requires that you bring your e-bike, fapiao/proof of ownership, and passport. You’ll get a blue tag to put onto your e-bike, which you can consider the badge of a law-abiding citizen, even if it ruins your sweet custom flaming skull decals. Another thing to consider is whether or not you can get your e-bike officially registered in the first place. Since September 2014, Vespa-style e-bikes have been barred from official registration. Any Vespa-style e-bikes you still see on the streets were either registered before then, and are on borrowed time (as we all are), or they are registered, let’s say, “unofficially.” You can go that route, or you can check the list of street-legal e-bike models, which are defined as e-bikes that weigh less than 40 kilos and have a top speed of 20 km/h. Any e-bikes sold in stores will likely be street legal as well.

Drive safe on the Fury Road Whichever path you decide to take on the road to e-bike ownership, be sure to check your brakes and stay alert on the roads. A good helmet, though not required by law, is a fantastically good investment. Shanghai traffic might not be that different from a Mad Max movie, but in a city with as many trucks, taxis and buses as this, the e-bikes aren’t the stallions of a dashing hero; they’re roadkill.

5 Ways to fight the Common Cold