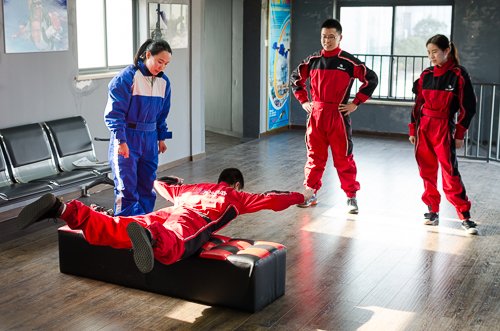 – The only one in town (that we know of so far)

Way out in Jiading, there’s a place where you can wind-tunnel float, and, as far as I know, it’s the only game in town. I’ve always wanted to try skydiving (still do), and getting levitated off the ground by a giant fan in a giant glass tube looked like the next best thing, just an hour’s metro ride away. So I thought I’d give it a whirl.

The place is called  CR wind, and you’ve got to call ahead to make a reservation. I had a handy Chinese speaking co-worker call for me (you should really get one if you haven’t already) and find out if they have English-speaking staff. They do. My co-worker also double-checked the price for me. I was hoping the cost I saw online was out of date, but nope, it’s 280 RMB for two minutes of hang-time. That’s 140 RMB per minute or 2.333 (repeating) RMB per second. It must not be cheap to power a giant fan that can levitate people.

At least the cost comes with equipment and locker rental, and a mandatory first-time flight lesson so you don’t give yourself a concussion. Cost being what it is, let’s not forget that you’re paying money to defy gravity; to be a feather on air, a leaf on the wind, a flying human giving the middle finger to physics. At least that’s what I imagined for my first time skydiving.

But this is indoor skydiving, baby—wind-tunnel floating—and it’s a little more work than tripping in the sky and never hitting a floor. It’s more like tripping and turning into a ping pong ball because a wrong twitch of the finger steers you straight into wall after wall. The mandatory lesson was advertised online as taking 45 minutes, so I thought it might be in-depth and useful, but in reality, it was a little more than five minutes. I (and the intrepid Chinese couple who booked with me) learned the basic body positions to ascend and descend, and they seemed simple, but are definitely not enough. If anything, steering is something that you just need to learn by doing, if only there was enough space to do so.

Take all the freedom of skydiving—of having a whole sky to fall around in—but then take away the sky and replace it with a 3-meter wide glass tube. A seasoned skydiver might have no problem avoiding the walls. But for a first-timer like me, about 175cm tall, my every attempt to get a feel for steering in the air was interrupted by a wall. It’s like balancing your entire body on a belly-pin that’s constantly moving up and down, side to side, and you try and adjust, then over-adjust, and then over-adjust for the over-adjust, and so on and so on. One of the staff goes into the wind tunnel with you to make sure you don’t try and bust through one of the walls, and they will help you experience wall-less floating by grabbing your ankle and ass to anchor you in the center of the wind tunnel. But then that’s like having someone chew your food for you and then barf it into your mouth, along with all that sweet, flavorful Shanghai air they’re blasting into your face at 40 km/h. It’s a good thing they remind you to close your mouth in the tube. You passively float there, no sensation of falling, no adrenalizing prospect of splattering hundreds of meters below, no getting sucked-up and food-processed by one of the tunnel fans, like in the child-abuse documentary Charlie & the Chocolate Factory. The experience becomes underwhelming and a bit empty when you’re anchored. But the guy didn’t do the work for me for too long, so I was back to trying hard not to look like a mop in a tornado. If floating around is enough of a rush for you, you’re still going to have a hard time enjoying the wind tunnel as your inexperience constantly flies you into the walls. With coaching and more sessions, I think I could learn to enjoy it more. I stepped out of the wind tunnel, a bit breathless, not really disappointed or feeling like I had wasted my time and money, but more just kicking myself for letting TV and movies influence my expectations too much. And after all that, I had to watch the next guy go, and I started to think, “Again. I want to do it again.”

Here is the address and contact information for this place:
No.2099 Yi Ning Road, inside the Shanghai International Circuit
Ticket booking: 4008215270