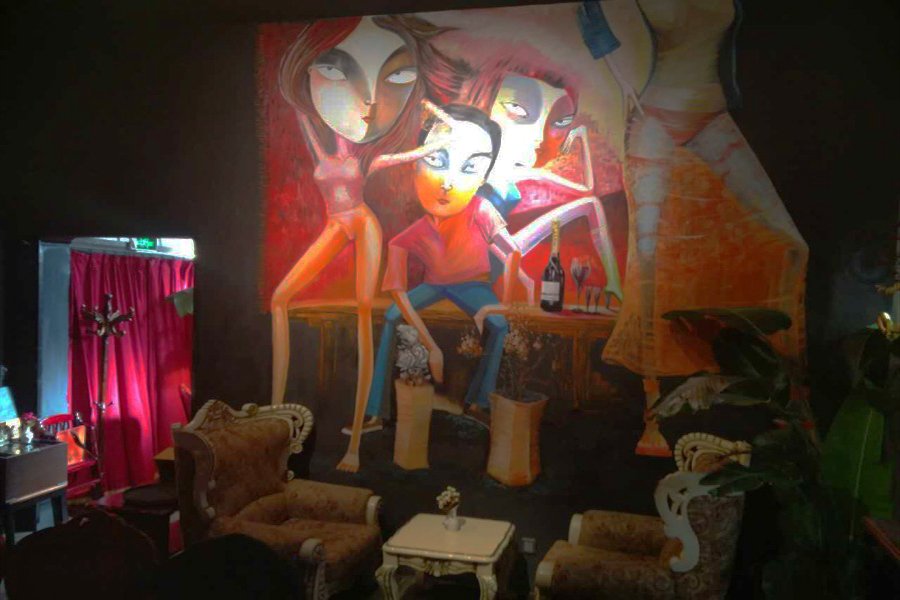 AuraCoolzey (written as “Aura Jing An” on their website) is the newly opened (Jan 2016) fourth endeavor of the Aura coffee and restaurant family, and it represents a typical example of things done well… about half-way. The location is simply perfect, in the heart of the metropolis, on Nanyang road, sharing a partition wall with Manhattan Bar (I include this information for those who need it, you know who you are). The architecture is cool, with the outside patio lit up by candles and rose windows on the walls of what was probably the remnants of an industrial premise from the beginning of the 20th century. The interior design is stunning as well. Commensals are welcomed by a maze of corridors, ex-industrial spaces, big salons, all embellished and refined with grandes murals-style prints on the walls, with antics inspired by Louis XIV’s court, with Kandinsky & Co. lamps scattered around where you’d never expect and tables enriched with Victorian-style cutlery. Don’t get me wrong, it might sound like the inside of an expressionist’s head but it’s nothing too serious, it’s not trying to paint itself like a royal chateau. Some design theory purists might find it a bit questionable, but the truth is Aura Coolzey has a very pleasant, out-of-the-box, eclectic style. An interesting and crazy excursion across the last three centuries of style that probably represents the most enjoyable aspect of the restaurant. What’s missing, though, is the rest: the food. Not really a small detail for a restaurant. Again, even the food is presented nicely (starting from the bread served in an elegant wooden box, French bistro-style) but the ingredients seem to be the last thing anyone put any energy into. The pumpkin soup is a bit watery and not really promising, with a white foam on the top that resembles what’s left after seawater crashed over a sandy beach. Even the slivers of Tartufo on the top add nothing to the final taste (I guess they put it for the sake of writing truffle pumpkin soup). The Paccheri are drowned in a redundant sea of tomato sauce, again with a useless refill of the pseudo truffle. The lamb has the kind of chewy texture you’d find in a school canteen and the salad is a mix of everything (three different kinds of lettuce, olives, pepper, three different kinds of nuts, slivers of (original?) parmesan, balsamic (original?) vinegar, olive oil, and even grapefruit). Finally the wine: the selection is great and even very well arranged, but the 2 complimentary glasses were completely oxidized. Overall, the atmosphere is great but the food is lackluster, a case of style over substance. Such a pity for such a cool location.

Claudio Grillenzoni is a passionate Italian gourmet and professional sommelier. He has been reviewing restaurants for all his life and thinks that delivering and promoting good food should be a mission rather than a job.