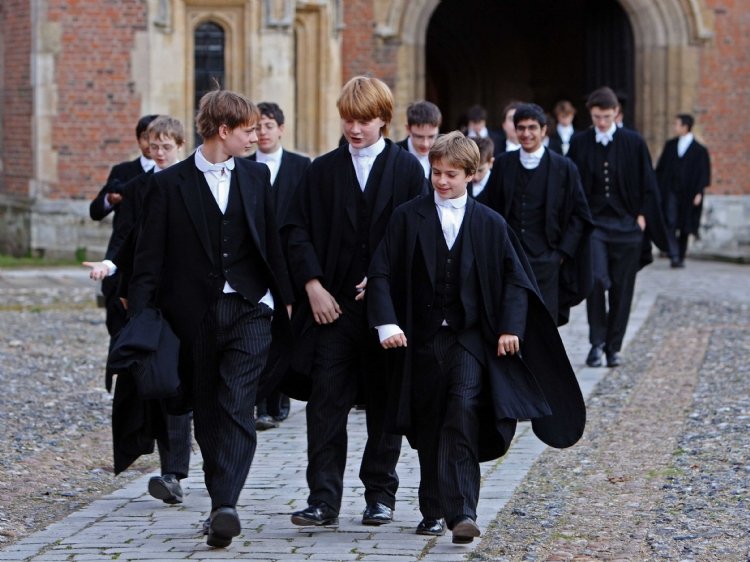 Private Schools in Britain are growing in popularity as the public schools become oversubscribed and experience mass funding cuts. The Private School System offers smaller classes and better facilities. Giving your child, in some cases an unfair springboard into a top ten UK University. Love them or hate them, if you have the wealth and the connections then why not send your child to one of these establishments. Most of these schools are not mixed and are all boys.

Harrow School will soon be opening a school in Shanghai. It has a very long history and is an all boarding school for the very wealthy. It is a boys-only school with enrollment beginning at the age of 11. Some of the former Harrovians include Benedict Cumberbatch from BBC’s Sherlock Holmes.

Dulwich College is an independent, public school for boys in Dulwich, southeast London, England. The college was founded in 1619 by Edward Alleyn, an Elizabethan actor, with the original purpose of educating 12 poor scholars as to the foundation of “God’sGift”. It currently has about 1,500 boys, of whom 120 are boarders thus making it one of the largest (in terms of numbers of pupils) independent schools in the United Kingdom. The school will be celebrating its 400th anniversary in 2019. Also in the academic tables, it scored in the top ten with an 89% A/B ratio at A levels.

Top of the GCSE and A level scores with A&B ratios of 97%. St Pauls has a very high academic reputation and has a history of rowing on the Thames. They also have an excellent rugby team.

St Paul’s is an independent school situated on a 43-acre site near the river Thames. It was founded in 1509 and has a 500-year history.

Eton College, often informally referred to simply as Eton, is an English boys’ independent boarding school located in Berkshire, near Windsor. It educates over 1,300 pupils, aged 13 to 18 years. It was founded in 1440 by King Henry VI as “The King’s College of Our Lady of Eton besides Wyndsor” making it the 18th oldest HMC school.

With Old Etoniand including Prime Minister David Cameron Eton has a long list of distinguished former pupils. David Cameron is the 19th British prime minister to have attended the school,[Eton ranked among Britain’s top three schools in getting its pupils into Oxford and Cambridge] partly because of nepotism.

Recently the Princes Harry and William attended Eton, therefore, it has the most esteemed reputation and it also boasts a high academic percentile of 96%.

Since 1933 it has been located on 250 acres (1 km2) of grounds at Sandy Lodge in the Three Rivers district of Hertfordshire.

Founded in 1561 by Sir Thomas White, Sir Richard Hilles. Today the school caters to 872 students between the ages of 3 and 18. The school is now an all-through school from age 3 to 18 after a merger with Northwood Prep School, Northwood in September 2015. This school is only 30 minutes from London and has its own lake for sailing as well as swimming pools and army facilities.

Westminster School is an independent school within the precincts of Westminster Abbey in England. It has the highest Oxford and Cambridge acceptance rates of any secondary school or college in the world. With a history going back to the 14th century, the school’s alumni include Ben Jonson, John Dryden, Robert Hooke, Sir Christopher Wren, John Locke, and seven Prime Ministers. Boys are admitted to the Under School at age seven, and to the senior school at age thirteen; girls are admitted only at sixteen.

is a boys’ independent boarding school near Radley, Oxfordshire, England, founded in 1847. The school covers 800acres (3.2 km2) including playing fields, a golf course, a lake, and farmland. It is one of four boys-only, boarding-only independent senior schools in the United Kingdom, the others being Winchester College, Harrow School, and Eton. All mentioned in this article above. Also, the academic scores for A-Level were at an impressive 89.7%!

This school has a great reputation for Sports and a lot of famous athletes go to this school on scholarships as well as boasting good scores in GCSE and A levels. They are not situated in London and are close to middle England. Loughborough is one of England’s oldest schools, pre-dating similar institutions such as Harrow, Westminster, and Stowe by a number of centuries. Alongside Winchester College, Harrow School, Monmouth School, Eton College, and Radley College, it is one of a select number of independent boarding schools in Britain that remain for boys only.

Merchiston Castle School is an independent school for boys in the suburb of Colinton in Edinburgh, Scotland. It has around 470 pupils and is open to boys between the ages of 7 and 18 as either boarders or day pupils.

In May 1833, Charles Chalmers took a lease of Merchiston Castle (the former home of John Napier, the inventor of logarithms) — which at that time stood in rural surroundings — and opened his academy, starting with thirty boys. This is one of the best schools in Scotland.

The Oratory School is an independent Roman Catholic boarding and day school for boys aged 11 to 18 in Woodcote, Oxfordshire, England. Founded in 1859 by Cardinal John Henry Newman. According to the Good Schools Guide, 70% of pupils achieve A/B grades at A-Level and that the school “enjoys inspirational leadership, has achieved GSG ‘overall best in UK’ for three years running and is consistently at the top of the tree”, with “state-of-the-art” boarding facilities and an ongoing refurbishment programme underway.

The Good Schools Guide calls the school “a serious player in the field of education”. Examination results from recent years have firmly secured Wellington’s place as one of the UK’s most successful academic co-educational schools. In 2013, more than 50% of pupils’ GCSE results were A* and at A-level, over 70% of pupils achieved A*/A grades. The Sixth Form 2013 pupils achieved an average IB Diploma score of 38.5, confirming Wellington College as one of the leading IB schools in the UK.

This is just a handful of the best private schools in the U.K. and next week we will look at the all-girls schools. Children need to sit an exam at the age of 11 called the 11 plus or Common Entrance in order to gain admittance into these schools. They also take students at the age of 13 usually from prep schools. The exams consist of verbal reasoning, mathematics, and English composition. However, be warned the waiting lists are long, so register your child early!