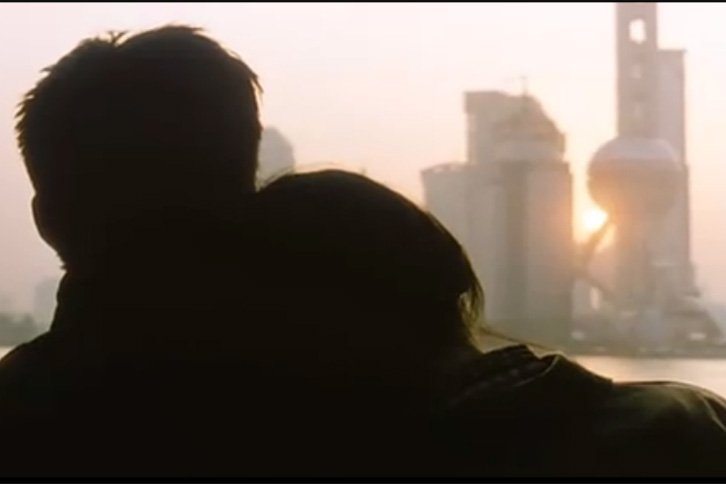 Shanghai, like all cities, is a place of contrast. There are the box-fresh skyscrapers and shopping malls, and the damp corners they step on. One area that falls into the latter category is the largely grim, faded industrial area we know as Suzhou Creek, which we encounter zigzagging towards the Huangpu River, all the way from meteor-crater Lake Tai.

The city remodeled the river-formally-known-as ‘smelly river’ into some sort of trendy art zone, and today we navigate it with dim hopes of stumbling across the fruits of its urban compost. But to me, rather than through any direct scenic intervention, my imagination in the area runs wild from the frenetic, romantic 2000 movie Suzhou River (苏州河), directed by Lóu Yè (娄烨). Fully embracing the city’s grit and grot, Lóu created something that stands in strong contrast to the Pearl Tower-studded tourism pamphlets creeping into international circulation throughout the ’90s. Here, the Pearl Tower is just a strange, alien, bally thing, distant in the mist, you know, like it is in real life. The tale is of obsession. Told from the perspective, and through the lens of “The Videographer,” initially you feel a bit too close to everything. But the experience, you realize, is so familiar. The camera casually observes scenes played out daily, scenes we who live here barely bat an eyelid at; but these scenes become something gorgeous amid the granular greys and browns of the Creek’s routine. And sailing through the normalcy, on a motorbike beside the eponymous river, is Marder. As portrayed by the late Jiǎ Hóngshēng (贾宏声), Mardar is captivating to watch. Both the actor’s stormy history of addiction and fantasy and his real-life romance with co-star Zhōu Xùn (周迅, you might know her from Cloud Atlas) contribute to his portrayal of the alluring character. Jiǎ plays a lonely motorbike courier who has lost a girl and gets a little confused by her doppelgänger, who swims in a tank at a creepy bar dressed like a mermaid. Said mermaid is The Videographer’s girlfriend, which sets the narrator’s tone as emotionally involved, with a touch of resentment. Emotionally involved, with a touch of resentment. This could describe ‘The Sixth Generation’ of Chinese filmmakers, for whom this film is emblematic. Otherwise labeled ‘The Urban Generation,’ this group tends to point the camera at the underprivileged inner-city folk engaging in all manner of low-paid professions and pursuits: the KTV hostess, the late-night masseuse, the delivery man. Petty crime plays a prominent role in a large number of their films, as it does in Suzhou River, with shady Buffalo Grass vodka dealings and a spot of light kidnap. But these films are consistent in their ability to position these astray characters deep in the shades of grey between good and evil. Marder’s willingness to eschew the law is rendered unsuccessful by the taunting naivety of the young girl he escorts around the city. These kinds of films offer a huge contrast to the Fifth Generation’s big-budget rural epics; and for a foreigner, seeing the country exposed in such a way offers us enormous insight into the working-class Chinese mind-set. Unsurprisingly, Lóu Yè was banned from filmmaking by the censorship bureau after screening the movie in Rotterdam without permission. A two-year ban from filmmaking strikes me as a rather ineffective punishment, adding more fuel to the fire for directors like Lóu.

Nevertheless, these days the film is often remembered as an early role for Zhōu Xùn, before her international success, with whom the audience experiences a turbulent first-person relationship. The gimmick could easily have been trite and dull. Kind of like the virtual reality relationship I once had at a PC room in Seoul with one of the Girls’ Generation starlets. We made lemonade together. Unlike that unfulfilling, empty attempt to tell a first-person love story, Suzhou River is short, fast, and contains as many of the twists and sharp bends as the creek from which it takes its name. 8 Places To Make America Great Again This 4th of July

Top 20 Things To Do During a Long Layover In Shanghai