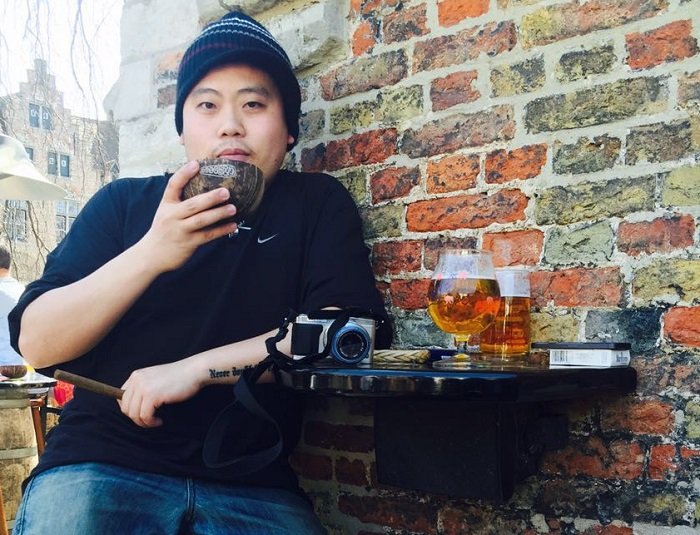 Tucked away in another one of Shanghai’s almost-hidden commercial squares sits a French restaurant in shanghai that’s anything but ‘just another one.’  It holds its corner and strives to make something of its French aspirations, with two ambitious characters, Felix and Jason, at its head, a creative menu on its plates, and a snug ambiance to lure in fine diners.

Firmament Etoile comes alive at night. Walk into it during the day and the high ceilings and open overhead give you a roomy feel that seems a bit cold. The decor seems a little odd, contrasting Van Gogh’s paintings with a wall of plants, and the brown table covers seem more at home in a canteen than a fine restaurant. But as you settle in, you start to feel the thoughtful, earthy décor warming you up and putting you at ease. As night falls, the kitsch table covers and the wall of plants dim the place into warmer tones and give it a cozy, romantic ambiance. Such small, eclectic but effective details go to show what kind of foodie freaks we’re dealing with here. Felix, a Beijinger in Shanghai, became enmeshed in the culinary world when his neighbor in Barcelona, a French Michelin 2-star chef, lost a bet to him and forfeited a 4-year introduction to the art of fine cooking a la Francaise. His method in all the restaurant madness is to gather choice ingredients for Etoile’s cuisine—whether it’s imported Australian beef or wild truffles and organic veggies bought in suburban Shanghai. Felix swears he’ll quit the day he ends up skimping on Etoile’s ingredients. It doesn’t pay to joke around with a man who doesn’t bat an eyelid over doing absinthe shots at 3 in the afternoon.

Jason, head chef at Etoile, is best described as a food nerd. He grew up in Taiwan where, at fifteen, he started teaching himself to cook. His passion for the culinary arts took him from Italy to Spain, and then to France, to learn each nation’s cuisine from 2 and 3 star Michelin chefs. He says he’s still learning, though. Every five years, Jason learns an entirely new cuisine—from scratch. He goes in without any preconceptions, only a genuine thirst for something new and exciting. And, tasting after tasting, spritzed with every screaming, plate-smashing kitchen tantrum he’s suffered, Jason has sharpened his art. His curiosity and passion made him the first Taiwanese person to receive the Verace Pizza Napoletana certification. For Felix and Jason, the only inspiration behind the restaurant is passion.  Jason’s longtime motto is “No recipe, just passion.” That sort of down-to-earth attitude should come as no surprise, as both Felix and Jason got their start as chicken fryers for KFC. They say that, whether they’re preparing a succulent lamb roast, or flinging crumb-smothered chicken into a deep fryer, the satisfaction at the end of a long, passionate day of kitchen yelling and swearing is the same.

But if you’d like to see them put their culinary talents where their mouth is, it’s a good time to do so. Etoile has a new winter menu. Huitre Excellente or La Speciale is apparently a favorite among the girls as the oysters have a soft and silky texture in a classically French dish, as are the triple-roasted lamb chops. The crowd-pleaser is without a doubt the TOMAHAWK (in Chinese, literally translated as “steak of battleax”), a solid kilo of Australian beef that’s enough to feed between 4 and 6 people, and the foie grass remains a solid favorite among the locals. The salads are crisp and cut to mimic the flower gardens that inspired them, while the mouth-wateringly good macarons have had their sugar-content halved to keep them more in line with the classic recipes and, incidentally, the local taste buds. I look forward to our full review of the place.

The easiest way for foreigners to register their residence online