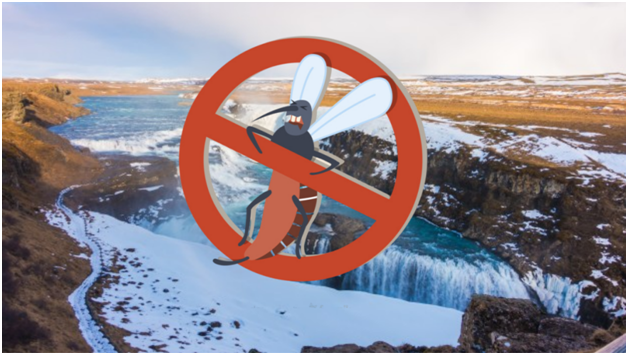 The buzzing sound and itchy bites of mosquitos annoy you? Do you want to escape their presence? Are you searching for a mosquito-free habitable place on the planet?

Stop your research right away!

I am here to share the mosquito-free paradise in this world.

The Hollywood films give Shark a man-eating reputation, but the animal responsible for most of the fatalities in the world is the mosquito. According to a report by Gatesnotes, 725,000 people die each year by the deadly diseases caused by mosquitos.

Before hopping into the discussion of an entirely mosquito-free country, let’s have a general overview of mosquitos. Yes, in almost every country, mosquitos are a threat. About 3500 species of mosquitoes are buzzing around the world and causing harmful diseases.

Every year, half a million deaths and billions of severe illnesses are caused due to the transmission of viruses via mosquitos. Some of the common diseases are Malaria, Yellow fever, Ross River virus, and Dengue fever. So Mosquitos are the tiny flying dirty syringes that transfer the droplet of disease-causing blood from person to person.

Why do mosquitos exist?

Mosquitos! That picky little creature seems to have no other purpose than irritating us when we are enjoying the bucolic walk in the woods or doing a festive barbecue on the lawn with our friends. So, if we wipe off all the mosquitos from the planet, the world would be even better. Then why do mosquitos continue to exist?

The mosquitos have a varied number of positive impacts on our ecosystem to provide pollination and food.

1,The larvae of mosquitos live in water that provides food to the insects and animals in water like fish, and dragonflies.

2,Adult mosquitos are part of the diet of birds and other insect-eating species.

3,The larva feeds on the organic matter, which helps the recycling of nutrients.

4,Moreover, they take the nectar of one flower to another, which results in pollination.

So mosquitos seem to provide no benefit to us, but for the plants birds, frogs, fish, and other animals, they are the source of food.

Where do mosquitos live?

Mosquitos inhabit the weeds, bushes, and tall grass of the parks, houses, and other buildings. For breeding, they rest in the stagnant water often found around the colonies, discarded tires, tins, and other containers.

As mosquitoes are attracted to heat, light, and carbon dioxide, during the daytime in summers, they hide in the houses’ ceilings and furniture. While in winters, when the temperature is below 10°C, they find the holes and hide there.

Studies suggest that mosquitos are present since the Jurassic era, but these biting flies for the first time were originated from South Africa, and they spread around the world.

What to do after bitten by a mosquito?

If mosquito bites you, then don’t be panic.

It is quite unusual that a mosquito bite can cause serious allergic reactions. But if in your case, if you feel severe headache, high fever, or have body aches, then consult your doctor; it can be a severe mosquito-boom disease.

Apply several different methods to kill mosquitoes because some of the methods can kill the larvae while others can target only adults. For the effective killing of mosquitoes, remove breeding grounds. Also, use traps, encourage predators, and apply an agent that contains IGR or BTI. Bug zappers and insect repellents are not effective for killing mosquitoes.

There are few of the scents which mosquitos dislike, so wearing these scents will keep them away from you. The scents are

You can use coffee grounds, garlic, camphor, beer and alcohol, dry ice, etc. to get rid of mosquitoes.

A COUNTRY WITH NO MOSQUITO You may find it exaggerated, but it’s true that in Europe, a mosquito-free country exits. This country is no other than Iceland. The enchanting landscapes of glaciers, hot springs, and volcanoes in Iceland are alluring to the tourists. Besides, no mosquitos make this region a paradise for tourism.

Iceland, a sparsely populated country, is home to hundreds of types of insects but is free of mosquitos. Interestingly, the neighboring countries (Scotland, Denmark, and Greenland) are immensely populated with mosquitos. So, if mosquitoes reach Icelandic soil through planes, they neither find favorable conditions nor have a place to breed and continue the life cycle.

According to DailyScience, five places in the world are mosquito-free. Apart from Iceland and Antarctica, the other three regions (New Caledonia, central pacific islands, and Seychelles in the Indian Ocean) have plenty of mosquitos. Still, these regions lack malaria-causing female anopheles mosquito.

Why has Iceland, no mosquitos?

One of the reasons for no localization of mosquitos in Iceland is the lack of stagnant water. Mosquitos always require the shallow ponds to breed, lay eggs, and to hatch into the larva. And to develop a larva into a pupa, they need a particular temperature of stagnant water, which is not present in Iceland.

The country has a very low temperature (less than 38 °C), making it impossible for mosquitoes to continue their developmental cycles. Every year, Iceland has three thaws and freezes, so the larva doesn’t get time to hibernate and rise again. Moreover, in such a cold climate, they will not find the prey to survive.

A theory suggests that the composition of Icelandic water and soil is unfavorable for this tiny creature’s survival. By time mosquitos may enter Iceland by wind or airplane, but the inhospitable conditions led to their extinction.

Which country with most mosquitoes

Mosquitos love to inhabit in countries of Africa, South America, and Asia (30 African and 13 South American countries are considered endemic). In these continents, nearly 50 to 100 million people are infected by the mosquito Bourne diseases. So if you are planning to explore South America and hike in the jungles of Africa, you are more prone to be bitten by this biting fly.

Future prospects about mosquitos in Iceland

According to entomologists, Iceland may not remain mosquito-free in the future. They predict that the changes in climatic conditions and global warming will gradually raise the temperature and make this region tolerated by mosquitoes.

During the past 20 years, 2 degrees Fahrenheit temperature of Iceland has been raised. It resulted in the colonization of more than 200 species of insects that were never found before. A biologist at the University of Iceland, Gislason, claims that if global warming continues at the same pace, we will soon find that mosquitoes will inhabit in Iceland.

Summing up, if you want to move to an area where you can’t catch mosquito Bourne diseases! Iceland should be your top pick. This lucky country sits closer to Europe and famous for the ring road, northern lights, and blue lagoon. Do visit these best places and make your stay in Iceland, more stunning.

Meet Fresh鲜芋仙 – Is it the Best Dessert Shop Near Me

30 Reasons Why You Should moving to shanghai