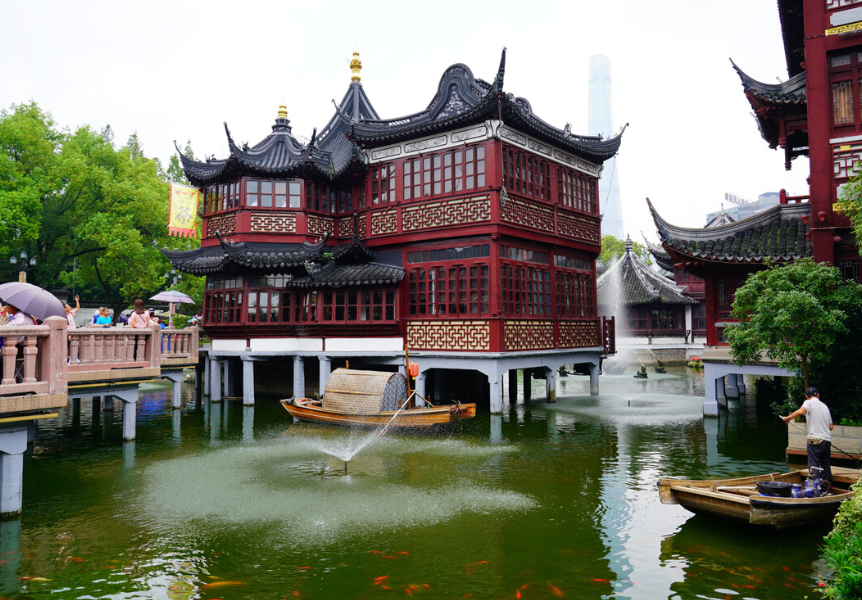 Have you got an opportunity to visit China? Must see the beautiful attraction of City God Temple, having a great blend of modern and traditional style.

In Chinese culture, the temples represent the long history and are considered as valuable art treasures.

Of course, temples are the houses of worships of many different religions like Buddhism, Taoism, and Confucianism. But in this blog post, we will share the details about the famous Cheng Huang Temple. Let’s delve into the main discussion.

The City God temple is one of China’s most famous scenic spots, having a history of 600 years.  The temple is a folk shrine situated in an old city of shanghai.

The word “Cheng” means a defensive city wall in old china, while Huang means moat that is a deep, wide ditch surrounding the city for the protection. It was believed that cheng Huang could protect the sacred city, particularly its walls and moat. In ancient China, almost every walled city owns a temple to symbolize the city’s immortal protection. In Shanghai, the city god temple was called Jinshan God Temple, committed explicitly to Jinshan’s spirit. However, in 1403, during the reign of Yongle Emperor, it was transformed into the city god temple.

At that time, the temple was very famous among the people, so most people visited the temple to pray for their health, peace, and good luck.

However, in Daoguang’s reign, the temple’s popularity extended as much that people started to set up their businesses in the areas adjacent to it.

So in the Cultural Revolution, the government stopped people from visiting the temple as it was closed, and its main hall was converted into a jewelers shop.

In 1951, the City God Temple’s governing council was dismissed, and the temple was entrusted to Shanghai Taoist Association and altered into the Taoist center.

The establishment modified the temple, abolished statues portraying the underworld’s notable characters like Yama, the magistrate of the dead, instead of focusing on the Taoist spirituality.

Then in 1994, the inhabitant Taoist priests made efforts to reestablish the temple for worship. The temple now shares the big part of the pedestrian zone allocated for the cafes and retails, in conjunction with the neighboring streets and roads,. In around 2005 or 2006, the temple was restored, and in October 2006, the Taoist priests reopened it. During the Sino-Japanese War, the Japanese lodged into the old city, and they stopped the worshipers from entering the temple and perform prayers.

As a result, the retailers and residents built a new temple in shanghai and attached a marketplace, which is popularly known as Jinling Road and Yan’an Road.

However, after World War II, the new temple waned its popularity, and finally, in 1972, it was demolished. But the temple is still in use, presenting the locality surrounding it. In China, the city God temple is popularly known as Chenghuangmiao. With the far-reaching history, the city god temple of shanghai attracts the tourists around the globe.

Presently the temple consists of 9 places, occupying 10000 square meters area. The places are as follows,

Furthermore, the West garden and East garden are the two most famous gardens within the temple Different cities in China have different city god temples. The cheng Huang temple of Shanghai consists of three town gods who are admired by the Chinese people. The three gods are as follows

During the late Yuan era, Qin Yubo served in civil service. He was summoned twice by the king Hongwu in his court, but he rejected each time. Finally, for the third time, he agreed to serve the role of Chief Imperial Examiner in the court. Inspired by his services, the emperor Hongwu ceremonially conferred him as a city god when he died.

Huo Guang was a Famous politician and jurisprudent in the Western Han dynasty. For the good of the state, He dethroned the unfit emperor and put himself into peril. Stimulated by his selflessness, people made him the First City God of Shanghai in the Yuan dynasty.

Chen Huacheng was a general in the reign of Qing who presided over the Chinese defenses. He promised under oath to protect the Yangtze to his last breath, and he succeeded. In war, while commanding the Chinese forces, the British naval artillery killed him

City god temple of shanghai address and how to get there How to get there

Take bus # 932 and get off the City God Temple Station.

Finally, to get to the destination. Take the City Sightseeing Bus, Line no. 1, 3, or 5.

Note: It may take a walk of 8 minutes to get to the Chenghuangmiao Street.

Travel by subway line 10 to get off at Yu Garden Station. From the exit no. 3 walk in the south direction on South Henan road for 5 minutes. Finally, walk another 5 minutes in the Fangbang Middle Rd. on the east. So it will take a total of 10 minutes to walk to Chenghuangmiao Street.

What is good about cheng Huang Temple? The city god temple was built to immortalize the blooming of Shanghai and its fostering to municipal status.

The temple is a glorifying sign of the three Chinese city gods. Mostly the locals visit the temple at the Sanxun festival when they have an intense desire to pray for their good fortune or destiny.

Note: Sanxun festival was a day when God began to look into his people. To celebrate the festival, people decorate shops and homes with lanterns.

It is famous for the food road where the national and foreign tourists visit and enjoy the flavor of delicious food.

This place’s specialties are the Best dim sum in Lubolang Café, The Babao rice banquet in Songyuelou, and Chinese vegetable cooked in Songyuelou. Inside the well-known city god temple is the classic Yuyuan Garden, which is packed with the handicrafts and unique artworks, popularly known as Yuyuan Market.

The market and the garden are located at some distance away from the temple. When the visitors and locals go to the temple, they do take a tour of the market. This city god temple bazaar shanghai is famous for a couple of things which includes,

The delicious Xiao Long Bao: when you visit shanghai, don’t skip Xiao Long Bao because I assure you, you will love it.

Inexpensive drones: these days the drones are famous among youngsters. Why not you get a drone at very low deals from this bazaar.

Variety snacks gift: if you search for a wonderful gift for your foodie friend, get some snacks gifts for him from this marketplace. You will find a lot of stores selling a variety of snack gifts at a very nice price. The must-try snack is Nanxian Steamed Bun; you will love it. When is the best time to visit there?

The weekend, i.e., Saturday and Sunday is the best time to visit the temple.

Which day the temple has most of the people?

The temple is packed up with the visitors on 28th March of the lunar month. The locals at this time of the year commemorate a fantastic festival for the gods.

If you are eager to enter the city god temple, you need to pay 10 Yuan to buy the ticket.

The city god temple is a wonderful place to visit. So whenever you are blessed to get a chance to visit Shanghai, check out those stores of City God Temple Bazaar. It will offer you to have a wonderful experience with beautiful landscapes.