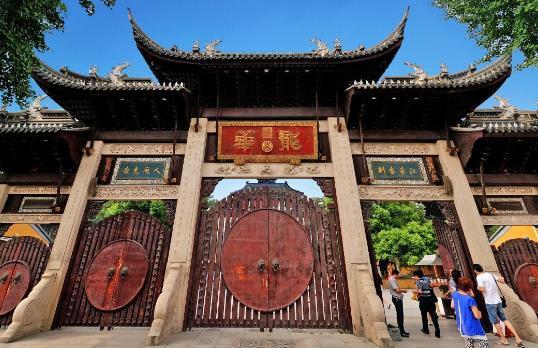 Let yourself be seduced by the charm of Longhua temple in shanghai, an ancient grandest and oldest Buddhist temple.

Whether you are looking for fun with friends or a family trip to a peaceful place, this temple is perfect.

Well, in this article, we will explore Shanghai’s beautiful Longhua temple. You can learn about the history of this Buddhist monument, architecture, and the reasons to have a tour of it.

Shall we start? Are you ready?

Shanghai’s Longhua temple, a Buddhist temple with a large native religious population, belongs to the Chan sect of Mahayana Buddhism. It is the largest temple in shanghai and probably in china too. The Longhua Temple is situated in the southeast of the Xujiahui shopping area in the north of Longhua Lu.

However, on the south side of the temple, the seven-story pagoda stands. It was believed that the Longhua pagoda is the only one in shanghai.

Later, 16 historic pagodas were built in Shanghai; among them, 15 are located in the neighboring countries of Qingpu, Jiading, and Songjiang. The temple has a long history, but how long? Let’s see

The history is about 900 years old, but most of the historians claim for 1800 years. The evidence suggests that the Longhua temple’s story started in the 242 AD (the three kingdom period).

However, it was considered that the King of the Kingdom of Wu, Suan Quan, had got Sharira relics, which is a burnt remnant of Buddha.

The King ordered to build 13 pagodas to protect these precious relics, and the Longhua pagoda is one of them.

At the end of Tang’s reign, the great temple was demolished and reconstructed in 977AD (in the Song dynasty).

Most people think that the temple was rebuilt on the same date when it was originally constructed, but it is not confirmed.

Under the reign of Tongzhi and Guangxu, the Qing dynasty, the Longhua temple was frequently renovated.

Later, modern restoration of the entire place took place in 1954. Presently, the temple has an architectural design of the Song Dynasty.

Apart from the pagoda, four main halls are also part of the temple that are exclusively allocated to the Maitreya Buddha. Moreover, a bell tower is also located at the temple entrance, whose bell rings around 108 times each NEW YEAR’S EVER as a symbol of destiny and good luck.

The eye-catching peach blossoms are packed in the extensive gardens or orchards that are a big attraction of the residents of neighboring sites every spring season.

In the 20th century, temple grounds were used for public executions. However, in 1927, the Kuomintang nationalists held a mass execution of the communists’ temple ground. The Longhua Martyrs Cemetery memorializes thousands of victims of this execution.

During the Second Sino Japanese War, in the temple area, the Japanese confined a large camp. A novel, Empire of the Sun by J.G. Ballard describes the entire history and claims that the Japanese used the Longhua pagoda as a flak cannon tower.

If you have ever watched Steven Spielberg’s movie adaption, you must have seen the pagoda above the prison camp.

11 reasons why you should visit Longhua temple Here are the 11 reasons you need to visit the sacred site of Longhua temple before you die.

The architectural design of the temple The temple is located in a 215,000 square feet area, consisting of 5 main halls.

The artwork of the Longhua Pagoda

The main building of the temple is the Longhua pagoda. It is a tower of 120 feet in height, constructed from red bricks (mainly) and wood (used in lesser amount). The pagoda holds 7 floors, with each reducing from the bottom. Structurally, the pagoda consists of a cylindrical core of bricks with a wooden staircase.

Some other pagoda characteristics are the octagonal layout of the floor and the balconies covered with the roofs. The outer end of the roofs (called eaves) is covered with bells for decoration. The ornamental handrails, painted with yellow and red colored paints, also enhance the pagoda’s outlook. The bell-ringing ceremony is held at midnight on Chinese New Year Eve in the famous Longhua Temple. For greater than 20 years, the temple has been a tourist point.

Every year, on New Year’s Eve, people eagerly wait for the bell ringing ceremony. However, 108 visitors can make a wish and strike the bell. The bell rang around 108 times to prevent the 108 misfortunes. Buddhist music and folk art performances are also performed in this house of worship every year.

Besides 108 people, others can jot down their New Year’s desires on a piece of paper (red color) and attach them to a giant tree. Moreover, Chinese and foreigners visit the temple with a bowl of flying monk noodles to pray for the prosperity, happiness, and good luck around the year. the pagoda of the temple is closed for the public due to some constructional issues. The entire temple can be easily visited during the daily tour hours of 7 am to 4:30 pm.

The metro you should take to reach Longhua temple shanghai

To get there in 4 minutes: For the New Year bell-ringing ceremony, the entrance fee is CTN 120.

However, for the normal days, the fee is CYN 10, but it is crowded through the visitors during Chinese holidays. So if you plan to travel to the temple, make sure that it’s not Golden week or any other Chinese event.

Do you need to book before visiting the Longhua temple?

Yes, we recommend you to buy tickets for Longhua temple in advance. Booking the tour ahead of time can secure your time at the spot. Different platforms provide an online booking opportunity.

Due to the spectacular architecture and artwork, the Longhua Temple is a famous tourist attraction. Everyone seemed to visit this sacred place to perform the prayers within the limit of their free incense.

The pagoda is the most impressive structure in the whole area. Whenever you travel to shanghai, don’t forget to have a tour of the Longhua temple! We assure you that it would be a treat for you to watch such a beautiful and sacred place!

Are you planning to travel to the Longhua temple? Well, if yes, then for any tour guide, you contact us through the comment section below.

Have a safe journey! Good luck!