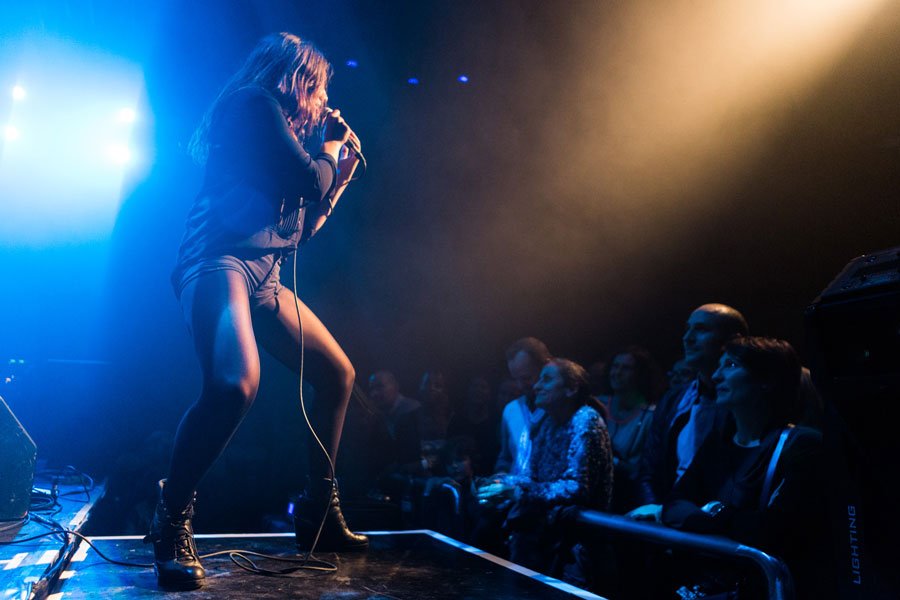 I was told Izia was going to be late for the interview because she was just stepping into the shower. This was about 2 o’clock. I sat myself down in the hotel lobby next to a Chinese film crew who were next in line to interview her. I was within smelling distance of the rest of her band, who were smoking a hand-rolled cigarette of what was definitely tobacco and absolutely not anything else. Five minutes later, she swept into the lobby in a leather jacket and hurriedly-dried hair.

So far, so rock roll.

Izia Higelin had just rolled into Shanghai on the back-end of the Francophonie festival of all things French which ended last month. She’d been in Chengdu two days earlier and had just finished a gig at Bar Rouge the night before, which explained the 2 PM wake-up call. That’s even early by post-Bar Rouge standards. With an espresso in hand and a kind of buzzing, electric energy about her, she gushed her way through the interview with zero indication to the kind of tight-packed agenda that saw her getting on a train for Beijing 3 hours later.

We talked (for a long time) about tour schedules, Rodin’s lover, how she’s tired of rock’n roll, and how Chengdu clearly has better music taste than Shanghai. Just kidding. She still likes rock roll.

EnjoyShanghai: Introduce yourself to our readers?

Izia Higelin: Yeah! I’m Izia, I’m a French singer and an actress, I’m 25 years old, I’ve been doing this for 10 years now. It’s my first time in China, I have 3 records two in English one in French. The two first ones were more like rock’n roll, the last one was pop-rock, so I do change a little bit.

Izia: Yeah… they have a great plane system so that’s cool.

ES: Well, you have had one experience to see a bit of China, and that’s staring out at a crowd of people, how’s that been?

Izia: It’s not really the French way, it’s more like expatriate people together. It was more like “hey, you’re here, so it’s good to have you here with us and we’re all together, yes.” The Chinese crowds were so respectful and so nice and so friendly and so into it, and they didn’t know me at all, so it was really like a huge surprise for them. It was like starting again for me, so it was really nice for me to play in a little club with people who don’t know me.

ES: You feel the ex-pat crowd was a little more blasé?

Izia: Not blasé at all, I think they were glad to have French bands in their city! But I did have this moment in the show when I’m singing acapella and in Chengdu and in France, everywhere when I do that, people shush and listen to the acapella song, and in Chengdu everyone was listening. And yesterday it was like “blah blah blah I don’t give a fuck,” it was really funny. They were excited but hard to impress.

ES: Straight to music talk. What was going on in your head when you went from [second album] So Much Trouble to La Vague, why the step away from the “Janis Joplin” sound?

Izia: That’s what I was tired of. It’s just that I don’t listen to rock every day at all. I used to when I was 15 years old, or 13 years old, I was listening to heavy metal and rock’n roll, and time goes and I discovered new stuff, like electronic music, rap music, hip-hop, and stuff.

ES: So why take it in the pop-rock direction?

Izia: We live in a generation where we’re so eclectic about everything. You remember when we were kids, it’s like “you’re a rock person, you’re a hip-hop person.” And now, it’s more like, if you don’t listen to everything, it’s like “what, seriously, you don’t like Kendrick Lamar?” Do you know what I mean? So I’m in this generation where I like to listen to every kind of music and to enjoy everything. I love the dark 80s rock, like Joy Division and the Cure and the Pavement, and I wanted to make something more intimate.

It looks like me in a way, because it’s catchy and you feel the energy, but it’s weird for me to talk about it since it was a year ago. I guess that kind of sound… I wanted to calm my voice a little bit. My voice is cooler now, when I was 16 I broke my voice every night, it was really hard for me, now I found a way to… how do you say, métriser, to conquer my voice? Tame my voice, more like.

ES: What was it like doing the music video for La Vague?

Izia: The music video was with Dominique Issermann, who is a great photographer, she’s a great friend also, and I really wanted to work with her. She can be a badass, an impetuous photographer, old-lady, really Grinchy, with great humor, really sharp, but really tender at the same time, she’s a great character, she’s awesome. We have that special bond, I see her like my funky auntie. We shot this video clip together and it was just me in the bed and her filming me and having a good time together. She knows how to catch me, how to catch my eyes and stuff. ES: Why the return to mostly French lyrics?

Izia: I didn’t decide to change my music to something more intimate, I just felt it… I didn’t want to do rock’n roll anymore, I was really tired, and I wanted to do something else. The French just came along in the process of the album. Like six months after we started producing it, and I had started to write the songs. It was supposed to be in English first and then I let the French have its chance.

ES: So you felt like the French was more natural for you?

ES: Do you see yourself as particularly French?

Izia: I never really asked myself that question. I think if you play the music, you can be French or anything. That’s what happened in Chengdu, people caught my energy, and there was an energy between us, and there was a bond between us that was created that night, so it worked, because we were like… together in that room together. It can happen anywhere if you have a good vibe and good energy, it’s nothing about whether you’re French or not.

ES: What’s next for you?

Izia: It’s the end of the tour on the 5th of May and then I start a new movie end of May. I’m going to play Camille Claudelle, the sculptor. Do you know Rodin?

ES: Oh, she was Rodin’s… muse? (Desperately pretending to know anything about art)

Izia: It’s not really his muse, she was a sculptor and he kind of stole her work… not really but yeah, he was really inspired by her. They were lovers for like ten years, and she was 20 years younger than him. So Vincent Lindon, he had the Palme D’or last year, he’s going to play Rodin, and I’m going to play Camille Claudel.

It’s been a long time, like a year and a half, that I haven’t played anything. It’s good to change what you’re doing, sometimes, because I’m a really active person and impatient and stuff, and so it’s been a long time that I’ve been on the road and doing music, so I’m glad to be doing a movie!

ES: Are you taking a break from music?

Izia: No, not taking a break at all! I really want to shoot my movie and then I’m gonna go somewhere off to write and compose. I hope that the album’s going to be out in September 2018. Wait. It’s 2016 right? [she translates the date in French out loud] No, sorry, September 2017!

Izia: I don’t really know how, but the tour inspired me in away. We did the last album and we rearranged it for the stage, we rocked it up a bit, to match it with the other songs. So I think I’m going to stay with the French, stay with the cooler voice, but with a bit more power in it. I think it’s going to be that, but maybe I’m going to make a Turkish album, I don’t know, maybe I’m going to do the polka. I wait for inspiration to strike.

ES: So, you’re off to Beijing, excited?

Izia: Yeah, wait why, is the train awful?

ES: No, I’m sure they’ll put you in the soft sleeper section.

Izia: Yeah, I’m a bit mad actually. Today I was supposed to go to the embassy and stuff, and I was like “dude, I have a train at 5, come on, cool it.” But next time, longer! I wish I had more time to see things here. I haven’t had time to see anything, so I’d really love to come back to enjoy Shanghai life and Beijing life, honestly.

Half an hour after the interview ended, I was informed Izia had passed out from exhaustion. She might be looking to take her music in a new direction, but passing out after a breakfast of two interviews and a double espresso before getting on a train for Beijing is still pretty rock’n roll. A bit about the Francophonie Festival

The first edition of the Francophonie Festival in China took place in 1995. Today, the festival has become an unmissable event for Chinese French-speakers and Francophiles. Taking place over 20 days, it includes film festivals, shows, literary readings, culinary and sporting events, song contests, and art exhibitions. The festival’s countrywide exposure is ensured by some twenty diplomatic delegations, embassies, and consular posts.