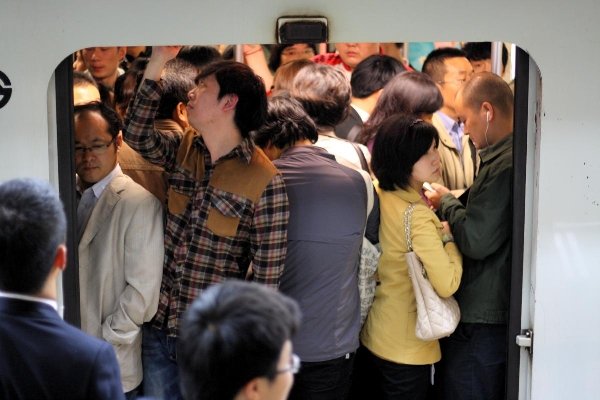 Shanghai is a metropolitan melting pot of Eastern and Western cultures, especially on the rush hour metro—a literal melting pot on wheels, where you can smell, breathe and taste the hot and salty cultures of over 8 million people mixing in the humid, underground air, until you’re weak in the legs and need to sit down, but there are no seats left so you must suffer. If there’s anything civilization can learn from this stewing of cultures, it’s that we all love public transportation so much, so we use it at the same time every day.
Whether you’re a grizzled public transport rider or a wet-eyed greenhorn, every city’s public metro has its own little customs and modus operandi. Here are some tips to navigate the complex, multiethnic culture of the Shanghai Metro.

1. Take the stairs instead of the escalator.

If you’re healthy enough, of course. If you have decent knees and a reasonable load, just avoid the escalator bottleneck completely and take the stairs.

Whether you’re up bright and early for work, or you’re going nowhere, there’s always going to be a race to the seats. That doesn’t mean it has to be disorderly and unsafe. Just as an officiated race has starting lanes, so does getting onto the train. Queue up in an orderly fashion, but when those train doors open, a starting gun might as have gone off. Let the people off first through the center as much as you can, but pass by on the sides quick if you want any shot at a seat. And if the door is locked and you need to get on, or off, don’t bother saying, “Excuse me, please.” It’s useless, even in Chinese. You’re not going to make it on the metro, or in the world, by being polite all the time. Firmly assert yourself through the crowd, but don’t hurt anyone in the process.

Or at least pretend to be. Dye your hair white. Hunch that back. Bend and slightly wobble those knees. Keep your face in a constant grimace and squint of concentration, as if you’re still straining under the weight of the past, and all the world has to offer in pain and suffering. People will be much more likely to give you their seat if they’re afraid of you falling to the floor dead in front of them. Even better, you can get one of those folding cane-stools or walker-seats. No one will fault you for taking up an inordinate amount of room to rest your aching joints

4. Stand by the walls, corners, and connectors.

If you can’t get a seat, or can’t pretend to be old, then at least avoid standing in the center of the aisle between seats or doors. It’s the worst place to be, with all the people jostling past and bottlenecking between you and the doors.
With the cold, unyielding inhumanity of a wall on your side, though, you can more easily squeeze your way towards the exit, and a wall won’t complain when you lean on it. And with two walls in a corner, you can stretch out like you have your own swanky Hong Kong apartment. Finally, the connectors are where you will find the most walls, corners, and standing space, so if you don’t get a section of wall you will at least be able to breathe.

5. Train to hold your breath.

Sometimes you won’t want to breathe in the metro. It could be someone’s wet sneezing, coughing, or even someone snoring on your shoulder; someone who didn’t have time to shower, their lunch cooling in the soupy air, or who knows what.
Any sort of cardiovascular endurance training, swimming especially, will help you hold your breath for longer. The world record for holding breath is 20 minutes, while the average Shanghai Metro ride lasts fifteen minutes. You can do it.

The last thing you want to do in the metro is fall. If you scrape your hands or knees on the floor, you’ll probably want to amputate to save the rest of your body. Prevent that decision from ever coming to pass by watching your step. Whether it’s someone’s bags, their feet, or their pet crab on a leash, they all could cost you an arm and/or a leg (Full disclosure: not really). Watch out for any slippery puddles of spit, too, and listen for the ominous hocking sound that foretells their appearance.

These tips will turn any fresh meat for the Shanghai Metro into a tough, well-done veteran—dry, clinical and professional, sorrowless as well as joyless—in no time. And, of course, with all the cultural mixing going on in the metro, there’s bound to be some transcendent, universal public transport culture growing out of the primordial ooze pot on wheels that is a Shanghai Metro train car. Much of what works in Shanghai will work across the world. Tokyo, Paris, New York City—ride safely and expertly wherever you go!

A free platform to appreciate interesting diary of expats in China

How Hard Is It To Learn Mandarin?

The Lonely Hearts Club: Shanghai’s Marriage Market in the Age Of Tinder