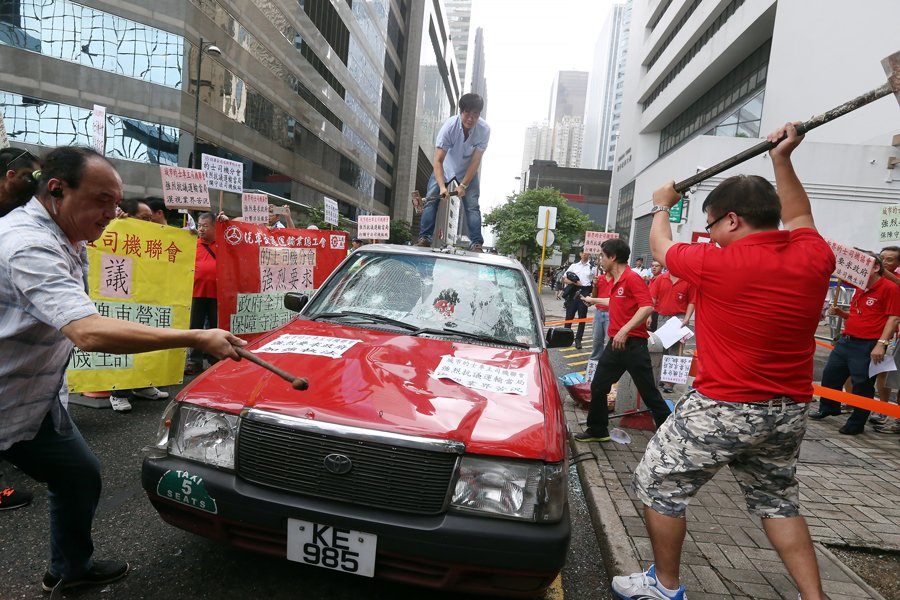 Last week, about a dozen drivers were caught and fined for illegally picking up passengers around Hongqiao from a ride-hailing app. What made the picking up illegal? Well, first off, you’re not allowed to pick up passengers from a transport hub like a train station or airport, but the real kicker here was that the drivers weren’t using the plates (or even the cars) that they’d registered with the ride-hailing app.

Which leads us to an important question; how do you tell if your Uber/Didi ride is operating legally? Caption: We mean except for all the obvious stuff.

Well, maybe not your Uber, since Uber decided to GTFO of China after having spent billions of dollars here. That is, it’s trying to GTFO, if the Chinese Ministry of Commerce will let it, but that’s another story.

Why does it matter you ask? Well, there’s a greater question of civic responsibility and abiding by the law of the country you reside in, but mostly, it’s just to avoid any trouble. Even if it’s just having to stand by awkwardly as your hitherto-trust-worthy-looking driver is interrogated by a zealous traffic cop. Caption: Don’t let the smiles trick you, they’ll break your knees in a dark alley if you break the traffic laws.

The Trick? Check the Plates

Honestly, this is fairly simple, but when was the last time you checked the plates on your ride?

The law states that ride-hailing cabs need to have Shanghai plates on their car or they’re operating illegally. It’s simple enough to check which plates are Shanghai plates; look for the character 沪 (hù) on them, like so; The obnoxious text doesn’t affect the legality, but could result in fines for excessive douchebaggery.

Hang on, there’s more. Notice that letter right after the character? That’s important because unless the car has plates that allow it to operate in urban areas (inside the Outer Ring Road), it’s also illegal! So, if the letters are A, B, D, E, F, G, H, J, K, L, M, N, P, Q, etc, you’re good.

If it’s 沪C, it’s not allowed to come inside the Outer Ring Road and is therefore not operating legally there.

If it’s 沪R, it’s registered on one of the outlying islands and isn’t allowed to leave them. Tip this guy. He must be in desperate need of the money to take a risk like that. “This printed-out piece of paper seems legit, has an “A”  on it, carry on.”

Or don’t. We can’t think of any way to do so that wouldn’t involve a high probability of a physical confrontation or way more dedication to following traffic laws than your average Didi commuter has.

The gist of it is, unless they have a Shanghai húkǒu, they’re not allowed to work as drivers. We guess if they’re getting a heavy Northern accent or talk to you incessantly about their hometown in Anhui Province, you could run the risk of offending them by assuming they’re migrant workers without the proper authorization.

Check The Number of Seats

Check The Wheel Base

We do this every time we get into a car anyway, but just so you know, no more than 2.7 meters between the centers of the front and rear wheel for petrol cars, 2.65 meters for new energy vehicles. (If they have a Z in their license plate = new energy vehicle. Unless they’re 沪A or 沪C, because of reasons.) Why Don’t They Just Get Local License Plates

License plates in Shanghai are super hard to get. To the point where some people get them before they even get a car. You have to bid on them at an auction held every month, and they go for a pretty penny, going for a minimum of around 83,000 RMB as of July, and lucky ones with lots of 8s and 6s in them going for way more.

So some drivers and ride-hailing companies just risk it instead. But you shouldn’t! Just think, you might have to waste as much as 15 minutes waiting for another possibly illegal driver to show up when your last one got pulled over for having Chongming plates.

Some people have no respect for other people’s time.