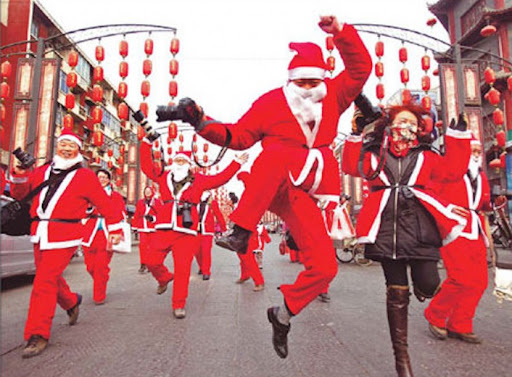 The word “Christmas” comes from Portuguese, which means birth. In Christian and Catholic beliefs, Christmas is celebrated annually on December 25th to commemorate the birthday of Jesus Christ. In every Christmas celebration, you will often hear people greeting each other with the words “Merry Christmas”. This sentence is a saying that you will hear every year to be precise at the Christmas celebration in December.

As reported by whychristmas.com, the term “Merry Christmas” instead of “Happy Christmas” refers to a designation that has occurred several hundred years ago. In 1534 John Fisher (a Catholic bishop of England in the 1500s) wrote a Christmas letter to Thomas Cromwell:

“And this our Lord God send you a merry Christmas, and a comfortable to your heart’s desire”

The word Merry can also be found in the song “God Rest You Merry, Gentlemen” which dates back to the 16th century. In English at the time, the phrase ‘Rest You Merry’ didn’t just mean happy; ‘Rest’ means “to keep, to cause to continue” and “merry” can mean “pleasant, abundant, prosperous”.

The trend of using the word Merry in Christmas celebrations then increased with the involvement of Charles Dicken, and others. The choice of the word “Merry” is also related to societal psychology. The word “Happy” is an emotional state, while “Merry” is behavior. The word “merry” implies a more active show of happiness – what you might think of as “merry-making”.

In essence, the word Christmas is coined from the phrase “Christ’s Mass”, an annual tradition when millions of people gather to celebrate the birth of Jesus Christ on December 25th. The first recorded Christmas celebration, however, occurred almost three centuries after the death of Christ in the time of Constantine, who became the first Christian emperor of Rome in 313 AD.

The introduction of “Merry” to the phrase took a little bit longer. Fast-forwarding to 19th century England, we see the first recorded use of “Merry Christmas”, from authors Washington Irving and Charles Dickens. Although both authors wrote tales of Christmas celebrations, it was Dickens’ story, A Christmas Carol, which popularized the phrase “Merry Christmas!” around the world. The celebration of Christmas has become increasingly popular in China in recent decades, especially in big cities such as Beijing, Shanghai, and others that take advantage of this celebration as a business and commercial potential. But Chinese society, in general, does not celebrate Christmas like people in Western countries such as the United States, and Europe does. Even Christmas day is not a public holiday in Mainland China.

Although it is not celebrated, the atmosphere of Christmas in some parts of China will be seen. You will be able to see the Christmas atmosphere on the roadside or department retail stores that sell Christmas-related knick-knacks.

Even though the Christian population in China is very small, they can still celebrate Christmas by going to church on Christmas Eve, on Christmas Day, gathering with family, and others.

On Christmas month, you will see crowded places in China starting to decorate their places according to the Christmas atmosphere. Many department stores are decorated with Christmas trees, twinkling lights, and festive decorations. Banks, malls, restaurants, shopping centers often have Christmas displays, Christmas trees, and lights.

One of the well-known traditions on Christmas Eve in China is giving apples. Many shopping stores sell apples wrapped in colored paper. People give apples on Christmas Eve because on Christmas Eve China is called “Ping’ an Ye” (平安夜), meaning peaceful or quiet evening, which has been translated from the carol ‘Silent Night’. The word for apple in Mandarin is “píngguǒ” (苹果) which sounds like the word for peace. Yes, who doesn’t know Santa Claus, the figure most recognized and eagerly awaited by children when Christmas comes. Santa Claus is known for his story of giving out gifts to children and families on Christmas day.

In Asia, like China, you will also be able to see Santa Claus every year. During Christmas, you can meet Santa Claus in crowded places such as malls, hotels, department stores, and others. Usually, when meeting Santa Claus, people like to take photos together, creating beautiful moments in the Christmas celebration.

How to Say Merry Christmas in Mandarin

Although it is not celebrated as festively as in Western countries, Christmas is actually a pretty popular holiday in China. You will see Christmas decorations on the side of the street and also in commercial places such as malls, department stores, hotels, restaurants, and others. Beijing and Shanghai are usually the 2 most festive cities at Christmas time in China.

If you don’t know how to say Merry Christmas in Chinese, here’s a quick guide:

圣诞快乐 is definitely the go-to phrase to use when greeting someone during the holidays. Quite literally, it means “Christmas happy.” A more extended version of this phrase is 圣诞节快乐 (shèng dàn jié kuài lè), which simply adds 节 (jié — holiday) into the equation.

Either greeting is appropriate to say to friends, family, and strangers. Because Christmas is also close to the New Year, for more details you can say this to your friends, family, important partners, and others to bring closer relationships and also enjoy the atmosphere of Christmas.

We wish you a Merry Christmas…

Another Way to Say “Merry Christmas” in Chinese

Since there are not many people who embrace Christianity and Catholicism in China, it is not appropriate to say Merry Christmas, especially if you are not in big cities like Beijing and Shanghai. Because the Chinese government is also very strict regarding the implementation and celebration of Christmas in China, but take it easy, if you are in a big city, saying “Merry Christmas” is a little appropriate, because Chinese people also celebrate Christmas as a holiday, even though Christmas is not included in the public holiday in China.

But for people who are reluctant to say Merry Christmas, they can take advantage of the culture and customs in China, namely the present gifts with both hands.

Chinese society has a culture of offer and receives gifts with both hands. Just tossing a gift at someone or using one hand to receive a gift looks a bit rude in China, as if you don’t really care about the gift at all. When we talk about the right gifts for Christmas in China, don’t get too tired of thinking. Apples are one of the trending souvenirs or gifts on holiday days in China. So even though we don’t traditionally celebrate Christmas, take advantage of the Christmas atmosphere to share and strengthen relationships with people we already know, or even create new relationships with other people.

10 Chinese Christmas Songs You Can Listen To When Christmas Comes

Music, singing together, choir, and others are things that are very much awaited in Christmas celebrations. For those of you who want to sing Christmas-related songs, Enjoy Shanghai provides several recommendations for you:

30 Fun Activities To Do At Night In Shanghai