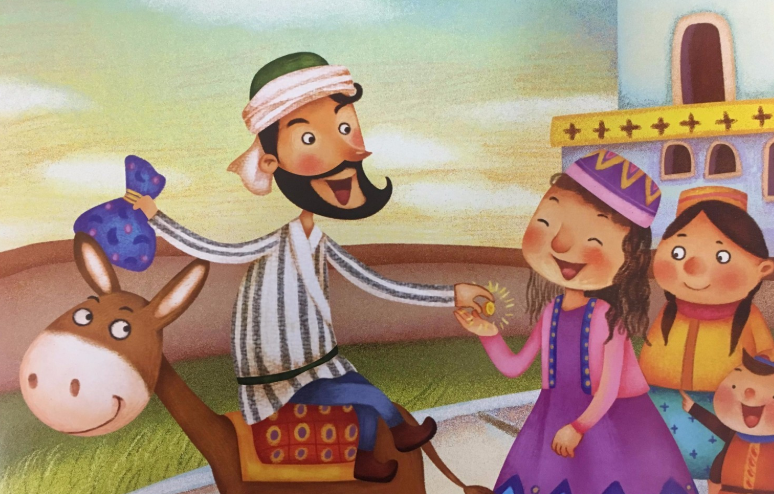 Watching Chinese Cartoon Characters are the best sources to improve our familiarity and ease of understanding a particular language.

We are all aware of the American and Japanese cartoons, but over the last decade, the Chinese cartoons and animation industry has made up its mark. Now your kids can easily watch the top-rated, award-winning Chinese cartoon characters.

The Chinese cartoons have won the hearts of millions of Chinese audience.

They have provided the opportunity to learn the Chinese language and culture.

Furthermore, The kids can quickly improve their Chinese language skills by actively engaging themselves in relatable storylines by the beloved cartoon characters.

Well, do you want to enhance the mandarin skills of your kid? are you Seeking the opportunity to improve his/her literacy?

Scroll down and check out, the top 20 Chinese cartoon characters to help your kids to learn Chinese. Big ear tutu is one of the famous Chinese cartoon characters that is explicitly designed for preschoolers.

The show uses simple mandarin, and it’s a good option for the kids to get familiar with the Chinese language.

Tutu, The leading character of the cartoon series has unusually large ears with an intuitive and impulsive personality.

As the young kids, the tutu is always curious about the things and tend to ask inconvenient questions.

His curious questions provide the learning opportunities to the kids. Nasreddin is also the most famous Chinese cartoon character in which The real hero in the cartoon has multiple good personality traits.

He is a wise man with full of knowledge. He has an intense hatred for evil deeds and tries his best to uphold justice in society.

Nasreddin lived in numerous cities, so he was embraced by the cultures of different nations.

The shanghai animation film studio produced the 14 episodes animation puppet series known as the story of Afanti in 1979.

The unique blend of humor and wisdom made Afanti a household name in China, within no time. Calabash brothers is another Chinese classic animation series that was released during the 1980s.

The series containing 13 compact and engaging episodes is a story of seven brothers having magical abilities.

They have super strength to defeat the demon and to stop them wreaking havoc.

The tale depicts the triumph of the calabash brothers over evil. So if your kids enjoy watching action-packed storylines, the Calabash Brothers are perfect for them.

In China, this series is popular among kids since it is broadcasted. The Chinese fantasy novel Fensgshen Bang portrays the character of Nezha as a warrior deity who was a student of Yaiyi Zhenren and who made his body with lotus leaves.

Another famous Chinese novel, Journey to the West, Nezha together with his friend conquered the monkey king and fought against the evils on the road to the west.

Nezha is a young guy who often flies in the sky through his wind fire wheels.

He has a red armillary sash around his shoulders, and a universe ring surrounds him.

This cartoon character became popular in a Chinese household in 1979. The show features multiple charters of different languages and cultures which take the children around the world.

The Mandarin Chinese in the cartoons is loved explicitly by the kids. Majorly the series has 15 exciting characters. The top 8 are, Doraemon is a Japanese cartoon but is very famous in china. The story of this cartoon series is about a Doraemon, a robotic cat that helps Nobita in his everyday life and tries to fulfill his wishes through the gadgets.

The greedy nature of Nobita always turns everything wrong. If you have tweens and teens in your home and want them to learn Chinese, the Doraemon cartoon is the best choice.

Interesting Fact: a lot of the things in China are decorated with the theme of Doraemon cartoons. The magic school bus is an adventurous show that discovers fantastic wonders and entertains the kids.

The show was first on aired in 1994, but its quality is timeless. In the new seasons, the keys of the bus are transferred to the retired younger sister of Mr. Frizzles.

The sequels of the show are readily available on Netflix with Simple Chinese subtitles and audios.

So this is the right pick for the kids of all ages.

Big-Headed Kid and Small-Headed Father (大头儿子和小头爸爸， The name of the cartoon series may seem to be weird, but these 5-minute episode animation cartoons are a big hit.

The main story is about the daily life of a 6 years old boy in modern china. This fantastic show is highly popular among kids as they can relate the storyline with their lives.

If you want to make your children familiar with mandarin Chinese, encourage them to watch these cartoons because the language used is very simple and easy.

9.    Little Tadpoles Look For Their Mom小蝌蚪找妈妈 This classic Chinese animation series is timeless. The cartoons follow the story of cute little tadpoles who are in search of their mother.

The mother had laid the eggs and left their kids alone in the pond. They meet different water animals in the pond and ask to help them in their search.

In the end, the tadpoles became successful and found their mum. They were unable to identify their mother because both look quite different from each other.

The mommy was a frog, and they are still little tadpoles.

This exciting story excites the kids and keeps them involved throughout the episode. It also helps them to understand the Chinese very well. The Adventures of Sanmao the Waif is the leading character of the fictional Chinese TV series Wanderings of Sanmao.

Sanmao was an orphan who used to wander around and was a beggar in old shanghai.

The story revolves around the ill-fated san mao who suffered a lot in search of happiness and warmth. Peppa pig, a famous British cartoon character, was launched in China in 2015.

It is trendy among Chinese kids. The leading names of the show are the Peppa, her family, and friends.

The cartoon characters repeatedly use the same terms and sentences intending to introduce the kids with the Chinese language. This animated TV series was created by the Iconix Entertainment in 2003. The main character of the series is Pororo, who is a blue and white penguin wearing goggles and helmet.

Pororo is an adventurous penguin of 5 years old who lives with his 6 friends on an island covered with snow and aims of flying.

The cartoons depict the practical effort of Pororo and his friends to solve the challenges. He is famous among the children of 4 to 7 years old. Bob, the builder, is an animated children program that is produced by a British producer in 1998 and was dubbed in Chinese.

In every episode, Bob and his team build and construct a new project. This uniqueness of the show fascinates the kids and the bright, lovely, colorful world in the show appeals to them.

This charm helps the kids to learn Mandarin Chinese.

In 2003, the cartoon series won the Children Animation category for a special episode A Christmas to Remember. Teletubbies is also a Chinese dubbed program whose center of attention are four multi-colored creature named as Tinky Winky, Dipsy, Laa-Laa, and PO.

These are popularly known as Teletubbies. These are such cute characters, and the unique antenna protruding out of the head enhances their attraction to the toddlers.

The series won the rapid success not only in China but all around the world.

Interesting Fact: Teletubbies has been translated into 45 different languages. Bonnie bears is the cute Chinese animation series with each episode of 13 minutes.

These famous cartoons are translated into various other languages. The series is about two bears named Briar and Bramble who put efforts to save their forest home by refraining Logger Vick from the destruction of trees.

So watch the series and know if they became successful or not. If you find it interesting, you can also watch Bonnie bear films.

The cartoon series provides the message of the conversation of the ecosystem to the kids. The heaven kid is a Taiwanese cartoon that depicts the culture of ancient china.

The cartoon is an adventurous story of a cherubic immortal and his two mortal mates. To repay the debts, he sacrifices his life and helps his friend to meet the challenges of the modern era.

This series is full of moral lessons for the kids. They can learn compassion, and thoughtfulness along with the great fluency in Mandarin Chinese.

17. Masha and the bear 玛莎和熊 Masha is a three-year-old girl who is hyperactive and naughty.

She loves to play with her bear, but every time the bear caught in trouble because of her. In short, it is the story of Masha, her bear, and her dad. This Russian TV series is highly prevalent in China. The preschoolers love the show.

Interesting Fact: the cartoon charter Masha is grounded on a real person.

The director of the project, Oleg Kuzovkov, found a cute little girl on the beach.

She was so genuine and playful to the strangers. Her personality clicked him, and he came up with Masha. Big fish and begonia is a Chinese animated movie written by Liang Xuan in 2016.

It is the first fantasy-based film of B&T Studio and Studio Mir.

The story revolves around a young girl named Chun who hides from the humans in the sea.

Chun transformed herself into a red dolphin when she lived in a human world for about a week.

During her stay in the human world, she notices this world and compares it with hers.

On the return of her voyage, she would meet a young boy Kun and spent the rest of her life with him.

This beautiful film has ruled the box office and had earned CN¥565 million in China.

Charlie and Lola is a fictional cartoon series created by an English writer but dubbed in Chinese to make it easy for the children to understand.

The leading characters of the series are Lola and Charlie. Lola is a little energetic, quirky girl with an imaginative mind while Charlie is the kind and loving older brother of Lola who helps her to learn different things.

Interesting Fact: the first play of Charlie and Lola was performed on 26 April 2008 at Polka Theatre.

Where can you watch those Chinese Cartoon Characters online free?

If you are looking for a Chinese cartoon, YouTube is a goldmine where you can find a lot of cartoons in Chinese. Netflix is another leading platform that offers easy access to Chinese cartoons.

Moreover, To facilitate your quest for the Chinese cartoons, here we have shared some of the sites that will enable you to watch the Chinese cartoon characters online free. You can easily find the masterpieces of all the eras in these sites.

All of these cartoon characters are popular in today’s china.

Even though these are geared up for the kids, but adults can also find them entertaining.

The interesting and engaging stories of these cartoons can make it easy and fun to learn the Chinese language.

Is this Shanghai’s cheapest Shopping destination?