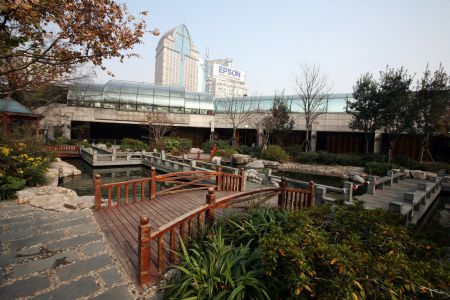 The Family Li Restaurant comes with an epic backstory. Here’s a quick reminder: Li Shunqing, Lord Secretary to Dowager Empress Cixi, resigns after decades overseeing the imperial menus inside the Forbidden City. He scribbles down as many recipes as he can remember and the secrets remain in the family. In the 1930s, Li’s grandson, Li Shanlin, spends a privilege youth loitering around the kitchens of the family mansion, learning from the legacy. History intervenes and he loses everything-memory excepted. The ’60s and 70’s are spent in illness and abject poverty, but his convalescence is spent re-mastering old culinary skills. In 1985 friends finally persuade Li, now 65, to share his knowledge with the world and a one-table restaurant is opened in the family home, a small Beijing siheyuan. It’s a huge hit. Family Li restaurants are later opened in Melbourne and Tokyo and, finally, VOL-owners of Bar Rouge and Sens and Bund (among others)-convince Li to let them bring his skills to Shanghai. Shanghai’s Family Li is very different to the homely, Beijing HQ. Occupying the lower half of a converted administration building in the Bund’s Huangpu Park, the restaurant ostentatiously attempts to conjure imperial grandeur in its design. Floor to ceiling drapery make guests feel like they are moving backstage in a Peking Opera, while circular moon gates lead into some of the dining rooms. However, something feels a little lacking. The absence of any river-facing window, for example, may concentrate attention on the food, but it seems a waste of a priceless location. The colour scheme, likewise, may appeal to a traditional Chinese aesthetic but the dull greens and matt ochre look dowdy to the untrained eye-vintage, perhaps, but a little sickly. Where Family Li really wins out is in the immaculate presentation and quality of the dishes. This is a restaurant that excels on attention to detail: the delicate slices and folds of the Fried Grouper, or the perfectly shaped shards of pepper in the Stir-fried Eggplant. No modern appliances-microwaves and pressure-cookers included-are used in preparation. The food takes an age to perfect and, consequently, diners can only choose between six fairly pricy set-menus (with a lighter-and cheaper-menu at lunchtime). However, the small, gourmet portions allow for a real gambol around Chinese dynastic cuisine, taking in a fabulous range of flavours and textures. It is, truly, like eating a little piece of history.

Here’s How To Get Any VIP to Talk to You