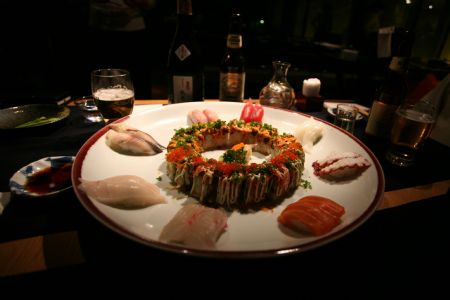 Among the new breed of triple-barreled product titles, the middle word-‘by’-is invariably the most important. It implies celebrity, and in an era of centerfold worship, having a parasitic ‘brand’ sponsor is essential. Whether or not said sponsor a) exists, or b) has had more than a golden handshake to do with your product doesn’t matter. In fact, the more mysterious and illusory the name, the better. Made-up celebrities don’t die. Or get caught doing drugs.

Taken on name alone, Haiku by Hatsune is therefore deserving of a raised eyebrow. Burrow a little deeper and it turns out that Hatsune is not an aging Japanese baseball star looking to pay off gambling debts, but the name of an existing restaurant. Hatsune was an early Beijing venture for American Chinese restaurateur, Alan Wong. The next evolution of the theme-Haiku by Hatsune-was also developed in the capital and enjoyed roaring success. Finally, five years later, Shanghai got her own version.

Thus, with shared expertise and joint management, Haiku was ‘born of’ Hatsune. Such has been Alan Wong’s success in building chic brands that it’s small wonder he didn’t opt for his own name on the plaque. In addition to the restaurants, his Block 8 multi-venue venture in Beijing has won the plaudits. And let’s face it-if he can manufacture chic in Beijing, Shanghai was always going to be a doddle.

So it’s proved. After a slow start, business at Haiku is booming. It’s packed nightly with a mixed crowd of Chinese and overseas yuppies. The word-of-mouth buzz (and triple-barreled name) may have played a part, but the restaurant has earned its own stars on the back of excellent mid-to-upmarket cuisine and a refined location in the heart of the French Concession.

The food is Japanese-Californian fusion-the sushi in particular transformed by sauces so rich and gooey that the USA probably has a texture patent. The décor, meanwhile, comprises stone, glass, water and steel surfaces, making the interiors feel modern and urban, while creating a Zen-like sense of sanctuary. This is complemented by low-slung seating upstairs, where patrons can down ice-bucket-cooled sake until they are virtually prone, staring up at themselves in the refection of the glass ceiling.

Book ahead for weekend sittings. Haiku, whether Hatsune knows about it or not, is hot. And deservedly so.