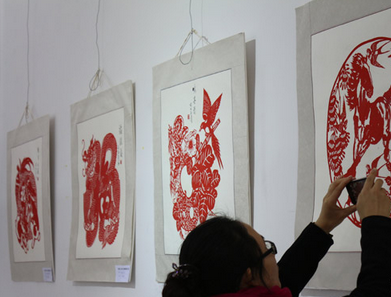 Have you ever heard of Chinese paper cutting art? Yes. This work of art is still preserved, especially by Chinese people. With paper, skills and complementary tools can produce beautiful work to decorate a room. In the beginning, Chinese Cutting Paper art emerged in the second century, precisely during the East Han Dynasty in the Xinjiang area of China. The inventor of the first paper was named Cai Lun or Cai Jingzhong. Until now, more than 2000 years this Chinese art of paper cutting is still sustainable and growing in popularity.

During the Qing and Ming Dynasties 1368-1912, this was a period of prosperity for this art. For more than a thousand years, women have been pursuing this art as a daily casual activity. They created different types of paper cutouts and passed this traditional craft on to their children.

In 2009, the art of cutting paper was recorded as one of the national cultures. Why? Because this craft has a very long history, more than 1500 years symbolizes the philosophy of the Chinese people. That said, if you put the arts in your home decor, it will bring happiness to the home owner.

Besides being a room decoration so that the house looks sweeter and beautiful, this craft can be used for birthday gifts, weddings, souvenirs or something else. To make it, the first thing you definitely need is Chinese paper, and then there are some tools to make the process easier: Scissors and cutter will be useful for cutting unused parts of the pattern of the paper. The cutter will later help tidy up the parts that need a more detailed pattern. Because the level of difficulty depends on the desired pattern/design.

Now, to cut paper, you should use special scissors to cut the paper so that the results are nice and neat. Do not use hair clippers, thread or cloth, as these can affect sharpness.

A pattern ruler can make it easier to make every corner of the paper tidier and more symmetrical. The result will certainly be different and better than not using it. This is to minimize errors in making patterns and slanted outlines.

This tool is usually available in various shapes and sizes. You just need to adjust which one is most suitable for the desired pattern/design. If you don’t want to be bothered, some products also sell a complete package for making patterns to make it more practical and easier.

Stationery is useful for drawing the desired pattern to be applied to Chinese paper. This one tool package is actually optional because you can choose not to use it. If you are not good at making patterns or you prefer to draw patterns via digital, it is also not a problem.

You can choose the option to use a computer. Make sure you have a supporting application or software for drawing patterns, yes. Usually used is Adobe Design, Corel Draw, Photoshop and the like. Usually, patterns made with a computer / PC are more neat and symmetrical.

Making this one craft is arguably “tricky and difficult”. The difficulty level depends on the desired pattern. The more complex it is, the longer the process. When the ingredients and equipment are ready, consider the following simple ways to make them:

Make the desired basic shape. There are lots to choose from, such as pictures of animals, flowers, characters, and others. After determining the shape, start drawing manually or digitally on the design paper. Pay attention to which parts will be cut and left.

If it matches your visual expectations, redraw the design on the final cut paper. Here you have to add a pattern to the inside or outside of the image so that the result is more beautiful. To make it more beautiful and look 3D, you can also add fine pencil shading in the parts needed.

After creating the basic shapes and patterns, it’s time to execute the paper pattern. If you are designing with a digital method, print your design onto final cut paper so you can cut it immediately. If it’s manual, you can start cutting out the outline first and continue to the details of the design pattern.

In this step, you need scissors and a cutter. Use both as needed. Don’t forget to pay attention to the pressure when selecting patterns and cutting, make sure it’s deep enough so that the pieces don’t leave paper fibres and the results are smoother and tidier..

Installing this frame is an optional choice for you. If you plan to display it and so you can stick it on the wall, then prepare a frame/photo frame according to the size of the paper that was made earlier. It can fit the size, or it can be a little bigger if you want to give a little space.

Also, prepare another contrasting coloured paper for the paper background. Actually, it doesn’t have to be paper, it could be cloth, magazine paper or any background that fits to be affixed to the frame. This depends on individual creativity and just according to taste. Attach using glue.

This Chinese handicraft has many diverse designs. But they have some patterns that are made most often. Usually, the designs reflect a certain philosophy that symbolizes the culture and traditions of the Chinese community. Here are some designs:

The writing Fu is a necessary design for Chinese people to make crafts. This design is a must-have Chinese New Year decoration in every home. They even always put a paper that says Fu in front of the door or in the corners of the room.

In Chinese belief, Fu means luck. They believe this writing will bring good things and reject bad things. But keep in mind, don’t put this writing upside down, huh. Because it has a much different meaning.

Dragon in Chinese culture symbolizes goodness, truth, strength and prosperity. According to their belief, this one animal was once the ancestor of humans. The dragon symbol on a building is considered to be the guardian.

When you go to a typical Chinese accessory shop, you will find a lot of Chinese Paper Cutting Art with animal designs that are in the zodiac called Shio. Chinese people are more familiar with the term Jian Zhi.

Jian Zhi is also a legendary story from Chinese cultural civilization that is included in Chinese astrology. Everything is believed to represent every meaning of a person’s birth month. The amount is also the same as the months in a year.

During the Chinese New Year, many people are creative to enliven by making various typical Chinese New Year room decorations. Usually, the houses will be dominated by red and yellow or gold. Well, it turns out that Chinese Paper Cutting can also be used as another work of art. Check out the following:

These accessories are usually made to follow New Year’s nuances, namely red and generally used to decorate the walls of the house to make it more attractive. The size also varies and according to the wishes of the homeowner.

A typical Chinese fan will make the atmosphere of the room look more oriental and Chinese. No need to buy expensive items at an accessory store, you can take advantage of cutting paper at home. For designs and patterns, it can be as desired and depends on each creation. Lanterns are also an essential decoration during the Chinese New Year. Many people are willing to enliven Chinese New Year by buying expensive items to display in front of the house. Now, you don’t need to buy it because you can make it yourself at home.

To make it more interesting, on the outside of the lanterns, you can add auspicious writings or pictures of Chinese ethnic symbols. Usually like red clouds, dragons, red flowers, Chinese gods and so on.

Have you ever realized that during the Chinese New Year, there is always a fish menu on food or snacks? This is because Fish, in their belief, symbolizes the smooth running of a business or effort. Well, this decoration is usually made using origami paper, but you can also use Chinese Paper Cutting.

How to make it for a fish decoration, requires two pieces of paper. First, make a head pattern, then prepare the other paper to make the body and tail. When finished, glue each part. Finally, hang it near the door or window using the thread. The figure that is often drawn and used as a pattern on Chinese Paper Cutting is Cai Jingzhong (Cai Lun). This is because he is an important and historical figure of civilization as the inventor of the first paper in China. Therefore, people often immortalize it in every unique Chinese knick-knack design.

In the past, Cai Lun was a state judicial officer. At that time, a paper was made using bamboo and mulberry bark. His discoveries are increasingly spreading to other countries such as Japan and Korea, until they are known throughout the world.

In around 105 AD, Cai Lun submitted a paper sample of his findings to Emperor Han Hed, who was then in power. Notes about the invention of this paper are immortalized in the writing of the official history books of the Han Dynasty.

Place to Study the Art of Cutting Paper in China

For those of you who are enthusiastic about this art and want to learn it, there are many Chinese paper cutting classes in China to choose from. One of them is Chinese Paper Cutting Art class by Culturalkeys.cn. You can check their offer in here[1]. The general duration is around 2 to 3 hours.

The artists there will teach the making starting from the basic steps, safety when making it, to advanced techniques to make it more skilled. You will also be trained to form a good and regular pattern.

Usually, the facilities you will get are trainings as well as the opportunity to taste homemade wine and tea while studying there. Your artistic Chinese paper creations can also be brought back home to display at home.

That is a review of the art of cutting paper (Chinese Paper Cutting Art) which is still popular with the public today. Who would have thought this paper could be used as a variety of artistic handicrafts.

Snow Bar: The Nuke-Button in the War on Summer