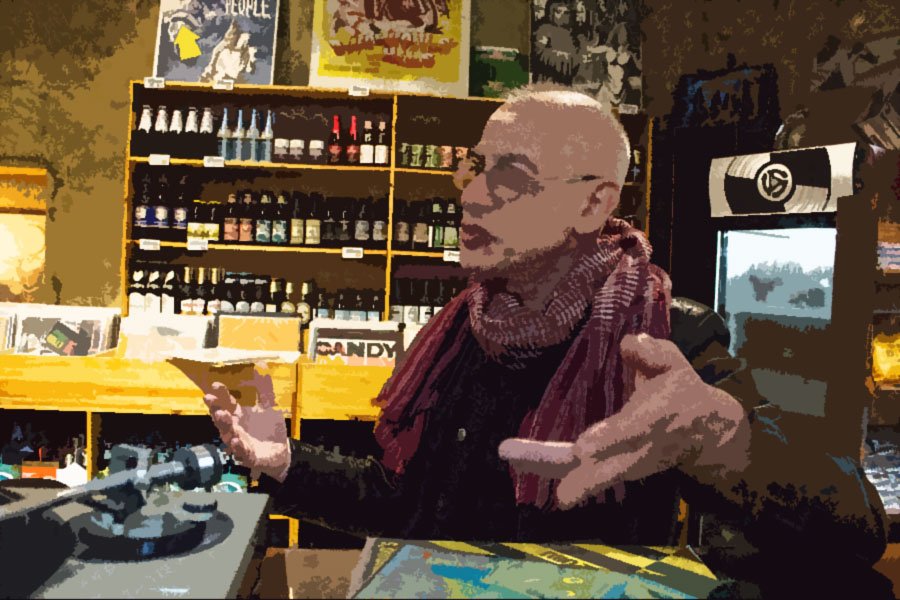 Scratchy is a bit of a legend. Over 40 years in the music industry as a DJ and still going strong, he’s got a CV longer than your leg, with some pretty big names on it. Ever heard of the Clash? Gogol Bordello? The Pogues?

He touched down in Shanghai last Friday, pretty much straight from his gig in Bangkok. Naturally, we had to meet him.

On a Saturday afternoon, as the rain was pissing down outside Uptown Records ‘n Beer near Yongfu Road, we sat down with him for like two hours to chat just about everything. DJing now versus then, his first record, what it’s like being a concert DJ and playing music totally unlike the band’s sound, and, of course, what this “The Rock and The Roll of The World” thing is he keeps talking about.

And because every trip down memory lane needs a soundtrack, he and DJ B.O. (aka Shanghai’s #2 DJ) raided the shop’s vinyl collection for some classics, niche appeal hits and generally hip tunes,

With the rain drumming down outside the window and good music playing, it was a hell of a way to spend a Saturday before Scratchy popped off to Shelter to play his first set, roughly 24 hours after he’d arrived in the country.

Check out our video below. It’s long, but trust us when we say that it was hard cutting it down this much. Put your headphones on, kick back, and let Scratchy tell you about “The Rock and The Roll of The World.”

Is it safe to go to shanghai? Here is The Answer To Everything