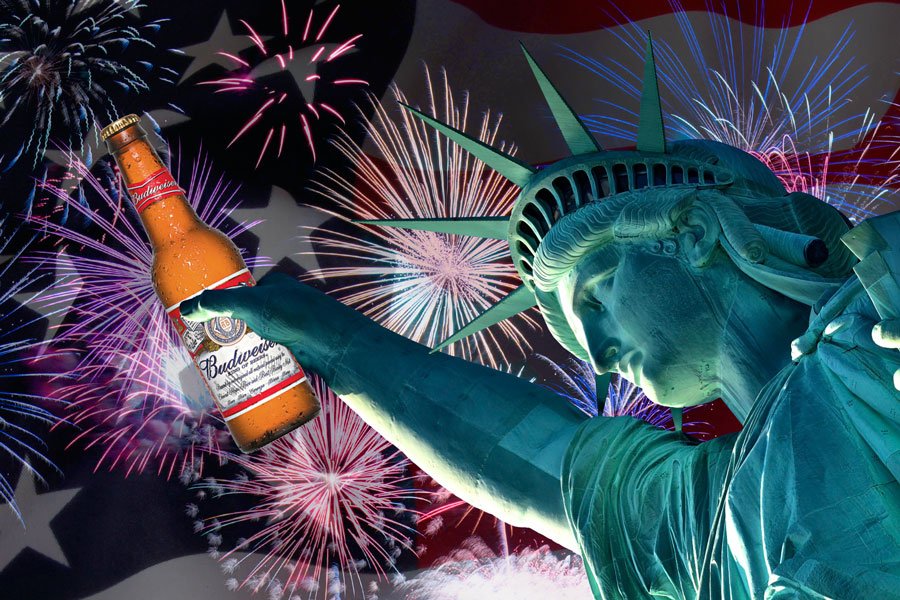 No parades, no fireworks (at least not on 4th of July). Being away from home might be tough, but bearable. Shanghai has lots of parties to offer those of you longing for brass marching bands.

And this year, for the first time, the Brits can join in!

For those of you who aren’t American, it’s just another excuse to drink and to enjoy the deals. Although Independence Day falls on a Monday, the celebration starts on Saturday. Check out the best offers in town. We decided to start this list off with the most obnoxiously American thing we could imagine. Hosted by the American Chamber of Commerce, the party is going to take place at Shanghai Disneyland Hotel. That’s a cool opportunity to experience Shanghai Disneyland. Best news, it’s only 12,000 RMB for a 10 guest package. It hich includes 1 day pass for Disneyland, dining voucher in Disney Town restaurant and a goodie bag. And the money presumably goes to making America great again.

Run by a Bostonian expat Sean Fitzgerald, who “after more than 55 years of wandering the globe and accumulating near useless experience in almost every field, has finally decided” to settle down in Shanghai and focus his attention on Southern Belle. That’s what the legend says, anyway, on his website. In the long tradition of American tall tales, you should go ask Sean himself, he can presumably provide folksy wisdom with a slide guitar riff in the background. And Independence Day might be a good chance to meet him and to try the Sothern Belle BBQ with 20% off and other deals. Yes, there’s live music. The best way to explore Shanghai parties in one night. Booze and bus are provided. The party vehicle will take you to 3 bars and 1 club. And, dangerously, only 200 RMB you’ll get free flow of alcohol at the first bar, free welcome shots at the second, free shots on the Party Bus and free drinks in the club. God speed, soldier, the fate of the free world lies in your gnarled, catatonic fingers clasped firmly around the Stars and Stripes.

Boxing Cat Brewery is turning its house into the all-American themed party. Janet Misloop is on the DJ set. Free flow drinks for 150 RMB and succulent BBQ starting from 25RMB only. Starts at 5pm goes until 10pm. “No Shirt. No Shoes, No Problem” says the motto of the Block Party. That might be a good way to stand the 40 degree heat (that’s 104 in Freedom Degrees). The District offers free shots, beer pong and much more fun. David Schroeder and Eddy Yang are at the bar, Jason Oakley is in the kitchen. “Make American drink again!” says the poster, we’re not sure what that’s referencing. Runs from 3pm until America is great again and Mexico pays for that wall. Apartment celebrates Independence Day by offering buy 1 get 1 free Apartment Signature Burger, Budweiser beer, Tomatin whiskey. The music is by Jonah and DJ OJ. Get started at 9pm until Hillary releases the transcripts for those Goldman Sachs speeches she got paid $200,000 for.

Southern Belle keeps celebrating on the 4th of July. Much like Bernie Sanders, it doesn’t want to quit. Sasha’s offers a 4th of July all-you-can-eat buffet full of American favorites. The ticket is 268 RMB for adults and 168 RMB for kids under 100 centimeters (about 3’2″). The dinner starts at 6pm until 10pm.

So that’s that! A slice of what’s going down on the 4th. Not to your fancy? You could probably try your favorite local dive bar, march in there and demand discounts for the birthdate of the greatest nation on earth. We doubt anyone would respond negatively, but if they do, just say it’s actually for 95th anniversary of the founding of the CCP.