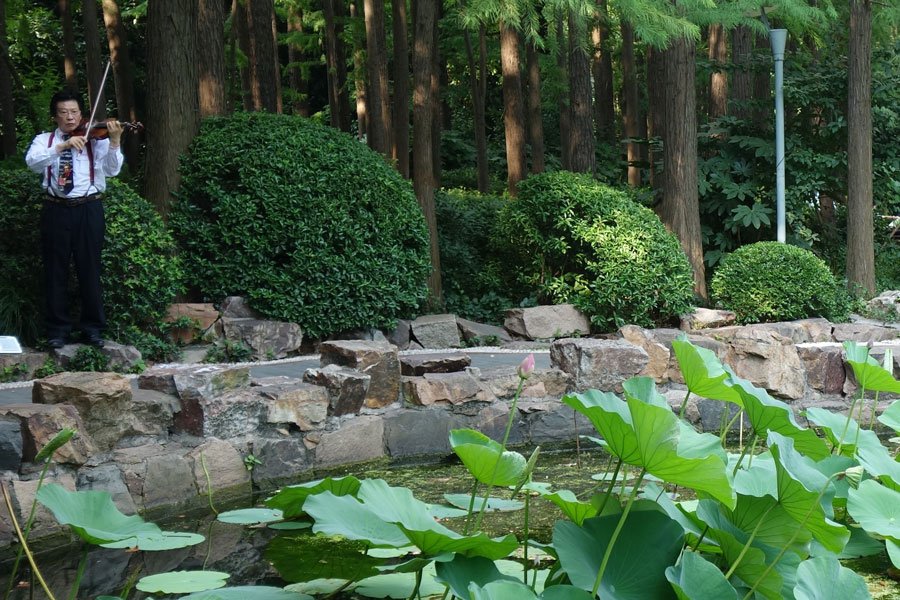 Dragonflies pepper the air, flying above a pond filled with blossoming lotus flowers. Along its periphery, groups of visitors with their backs turned to the water take colorful selfies. A man wearing a dress shirt and suspenders over slacks in the 39-degree weather stands nearby playing the violin. Tourists, selfies, the random crazy scratching out tunes – at first glance it could be any park, any summer, anywhere.

But just inside the entrance gate to People’s Park, across from Shanghai’s Grand Theatre, is the infamous Blind Date Corner, also known as The Marriage Market. (Also mistakenly known for three years to my American friend who doesn’t speak Chinese as the place where parents go to post images of their lost children.)

In theory, the marriage market is not so different from online dating. When we fire up our smartphones and swipe left or right on an image of another human when we scan a profile for words that ring true, aren’t we reading the same information that’s on display here: appearance, education, occupation, social status, interests, desires? Online they are dressed up in a package that feels familiar in its modernity. The marriage market is simply online dating’s analog version – live action match.com.

However, unlike other analog forms– the cassette tape, the VHS, physical books – the marriage market has flourished.

Under a covered underpass, umbrellas line both sides of the path, opened and propped up on the ground. Pinned to each is a paper describing an eligible bachelor or bachelorette. The advertisements harken back to a bygone era – when notices were posted in the central square when the king’s decrees were shouted by a knight on a horse. Here, some papers are typed up on a computer. But many are handwritten in messy Chinese script. One woman has cut out pastel pink hearts and taped them along the border of her page. Another woman has hastily scribbled her son’s stats with the marker on the side of a ripped-off shopping bag, the orphaned handle of red rope hanging haphazardly – conveniently – over the characters that reveal his monthly salary.

Mothers and fathers and grandparents sit behind their umbrellas. They look at me the way a puppy in a pet shop looks out at pedestrians. Please love me, please spend time with me. It makes me feel uncomfortable and guilty, so during my first loop around the market, I try to avoid eye contact.

Like any dating app, the singletons on display in the marriage market are nameless. The top line simply states “Girl” or “Boy.” Underneath are the subject’s birth year and month, height, job, monthly salary, hobbies, education background, and sometimes, for men, whether or not he owns an apartment in Shanghai. If so, of course, size matters.

Unlike a dating app, however, which caters to a person’s singular tastes, algorithms crunching everything from browsing patterns to favorite films, here there are no short cuts to love. I put one foot in front of the other, forced to browse at random, reading about the seventy-two-year-old widower then the twenty-five-year-old transplant from Beijing. There is a sense of serendipity about the place, even a pleasure, to its disorganized array.

The marriage market, literally translated from Chinese to “blind date corner,” is actually a series of corners, a weaving set of labyrinthine cobblestone paths. Others, like me, are here to take it all in. Young couples stroll arm in arm, smug in their coupledom, reading the signs with detachment and for amusement, the way some friends have told me they like to browse Tinder with their partners. The sunlight drips through the lush trees, marbling the paths with light.

Girl, October 1987, 163 centimeters, Works in the Arts, Enjoys Reading, Swimming, Singing. I stand in front of the umbrella recognizing myself in the foreign characters until the man behind the umbrella growls at me to move on. His daughter’s doppelganger is blocking the way.

Part of the strange sensation of being a young woman here is the feeling of being on display. But it is not the usual sort of display. It is not the daily display that women are subjected to all day long – on display for men who jeer at us, who steal quick glances, whose eyes undress us and whose attention we at times revel in and at times loathe. This feeling is different, multiplied and expanded. Here I am on display for middle-aged women and grannies. For fathers who imagine my body under my dress. I feel their eyes preying on my face, the complexion of my skin, my figure, my legs. And I also feel through all those gazes the collective judgment of the faceless single men of Shanghai.

Parents and grandparents pass phones back and forth, flipping through photos, grunting approval or disdain.

There are a few young people representing themselves. Single, older men are the most active, walking without umbrellas, eyes busy scanning the crowd. They are free agents untethered to umbrella or curb, like lions loosed from the pride and on the prowl.

A 48-year-old man comes up to me and asks whether I am looking for a boyfriend. When I tell him I am already married, he asks for advice instead. “Try going online,” I say. “It’s faster, more efficient.”

“You’re right,” he says. “The rate of success here is very low.”

Our quick conversation draws a crowd. It is the kind of crowd that builds when people see a long line and join in for whatever has been deemed worth waiting for.

After I am approached once, I am approached often and frequently thereafter. It is as if someone has spread the news: a young lady is here, and she’s willing to talk. Whenever someone walks up to me, three or four others close in, craning forward to hear, afraid of missing out. I feel someone grab my upper arm; I pull away and move on.

Another single man follows me around for five minutes, even though I keep walking back and forth in strange circular patterns along a single stretch of 15 meters to try to lose him. As I look to check whether he is still there, we accidentally make eye contact and he runs up to ask, “Are you looking for a boyfriend?”

A mother approaches, after hearing me explain my accent to someone (I am Korean-American). “My son is twenty-nine,” she says. “He loves taekwondo and has even been to Korea for competitions.”

“Married.” I hold up my ringed hand

“My husband is Shanghainese,” I say, implying: he’s nearby, and he’s got my back.

She pushes a photo in my face. A good looking guy, in fashionable clothes and the type of haircut that requires blow-drying to maintain its severe angle. Not my style, but his mother looks at me with such longing for affirmation that I say to her, “He’s very good looking. He probably doesn’t have a girlfriend because all the girls are intimidated by his looks.”

She smiles and quickly agrees and becomes talkative. Ms. Zhang has been to the market four or five times already, and though she rarely finds a good girl, today she says is particularly bad. It is too hot to draw enough people.

I ask what kind of girl her son is looking for, and she gives me a typical answer: “White skin, a good body.” As she speaks, her eyes travel up and down my dress, now a bit clingy in the heat. Like many others, we chat and separate on good terms. If we saw each other another weekend, perhaps we’d make small talk, catch up on progress. Maybe even become friends.

Everyone tells me that the rate of success here is abysmal, indulging in the complaint like students complain about school work. On the surface, the words mean life is hard, but they signal productivity, progress. There is a camaraderie here as parents conduct this Sisyphean but most human of tasks, finding love. And that in part is what keeps people coming back, even on the hottest days of the year.

Most parents and grandparents here belong to China’s growing population of retirees. At People’s Park, they have a reason to meet new friends, to feel optimistic, and ultimately, to be less alone. It may not work in finding a daughter or son-in-law, but it’s better to share in a hopeless mission with others, rather than tackle it alone.

Later, on my way out of the park, I run into Ms. Zhang again. I assume it is coincidental. As we walk to the subway station, she tells me about her hometown. She has been here for four years. We discuss the unrelenting weather, the unrelenting price of Shanghai apartments.

As I prepare to leave, she stops and asks if we can exchange phone numbers. Before I repeat, with emphasis, that I am married, she explains. “In case you have a friend you think is good quality. You can let me know.” I don’t want to give out my number, so I take hers instead, and we finally say goodbye.

Though I will likely never see Ms. Zhang again, the regulars at the market will, every Saturday and Sunday from noon to five. They have formed a community, have bonded over their shared interest. They get regular fresh air and exercise and gossip. They have created for themselves what in college we could easily call a club.

In the subway, I re-enter the real world, the world of people whose first order of business is not marriage and kids. But it takes a while for me to adjust. I make eye contact with a man leaning against a wall and feel uneasy. Is he going to ask me if I’m married? Why does he stand there, studying my face? Is it not quite white enough, am I not quite tall enough?

I look away and rush into the open doors of the subway train. During the ride back home I do not study the faces of passengers. When I make eye contact with a stranger, I turn quickly self-conscious, encumbered still with the gazes that linger from the park. This is why the single send envoys, I realize. I start twisting my ring absent-mindedly, as is my habit when I get nervous, feeling for the texture on the inside where our initials and wedding date have been engraved.

When I arrive back home, tired, anxious, sweaty, I find my husband sprawled out on the couch with the AC turned up full blast. I kick my shoes off and join him, the quiet of our apartment relaxing and cool. I settle down and give a little sigh, and I am welcomed back with open arms to the little two-person club of our own.

Escape to Shanghai: Mostly True Stories of the Wukang Mansion