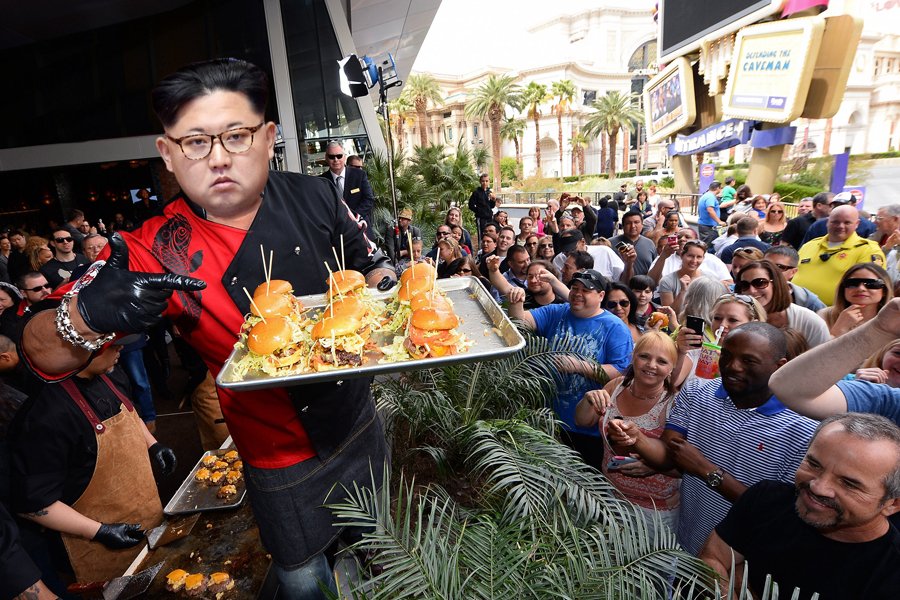 Alexandre Gobin takes us beyond the 38th parallel (sort of) for a taste of kimchi that might be as cold as the region’s prospects for democracy.
—

Many of us here in China have probably thought about making the trip to North Korea, just for the hell of it (perhaps literally). I mean, it’s so close, and it’s got that appeal of forbidden fruit, if you were to equate fruit to civil liberties. But then Thailand is just as close, and there’s actual fruit, on white sanded beaches no less, and that’s probably where you’ll end up.

Fortunately, there’s (sort of) a way around this vacation-picking pickle: visit a Pyongyang Restaurant here in Shanghai. At least that’s what I thought I could do. I mean, there’s no better way to get a handle on a country’s culture than by trying its food and witnessing its performing arts. And Pyongyang Restaurant has both! Of course the place is no concert hall; more like a quirky cabaret made in a forced-labor sausage factory. Pyongyang Restaurant is a multi-national chain owned by the North Korean government and staffed by carefully selected North Korean migrants. In Shanghai alone, there are locations in Pudong, Minhang, Changning, and Xuhui (the one I visited). Every now and then, there’s a news story about staff defecting to South Korea. Who can blame them? Restaurant service is a terrible gig. Though all the staff at the place I went to looked happy enough, or they just hid their anguish well. Thanks to the internet, I had this anti-romantic fantasy that a North Korean restaurant would involve food coupons, suspicious glances, echoing whispers, Dennis Rodman, no photography, decorations along the party line, and an overall stark atmosphere of brutal secrecy. Of course that’s only mostly fantasy. Upon walking in, I was greeted by beaming smiles from a row of pretty mid-twenties girls in colorful costumes. The moment was only slightly eerie. The one piece of propaganda I saw was a TV playing a video that alternated between scenes of cruising warships and a massive concert orchestra. The overall décor reminded me of a fancy Chinese restaurant, warmly lit with dark wood and marble furniture and ink paintings on white walls. The place looked deserted, though it was a rainy Sunday. You could say the emptiness gave the place more of an “authentic” North Korean atmosphere, especially since there were easily more than a hundred seats available. When I sat down and started to take a few photos, I was told that pictures were not allowed. This sort of made me feel self-conscious and I began to wonder how the waitresses actually perceived me behind their unwavering smiles. Did they think I would use pictures in some ploy to overthrow the manager of the restaurant? Or did they just hate me for being a citizen of an imperialist western dog country? I may have been overthinking this, especially because my friend discreetly snapped pictures anyways and at no point disappeared into a black bag. Just like their suppression of free photography, their service was prompt, nice, and attentive. However that might have been because there were twice as many staff as customers. We got our food in less than ten minutes, though the food tasted like it was cooked in half that time. My friend and I ordered kimchi with eight tiny cold side dishes, a beef and octopus hot pot for two, bibimbap, which is a rice clay pot with chicken and veggies, and a seafood pancake. The kimchi was okay, but probably not spicy enough for spice masochists. The clay pot tasted like a standard rice dish from any hole-in-the-wall restaurant around the corner, so nothing special, though the chicken was pretty tender and juicy. The hot pot tasted bland, like leftovers from last night. This is only a small slice of an extensive menu, and disappointing food isn’t the worst sin on its own. Pyongyang Restaurant’s forgettable dishes aren’t cheap, though. Expect to spend anywhere from 40 to 300 RMB per dish. Their drink menu is also pretty pricey, but not extensive at all. You’ll have to settle for Chinese baijiu, Korean Soju, Dynasty wine, or fun-sized bottles of beer (Qingdao or Budwesier) for 20 RMB each.

Otherwise, it would have been interesting to have a nice cocktail while watching the show they put on every night at 19:30. A disco ball flickers to life, the smiling girls turn into performers on a little stage, and the place changes from a decorous conventional restaurant into a weird cabaret that combines songs in Korean, an accordion, folk drums, flower dances, a synthesizer, and an electronic drum set.

I thought it was slightly embarrassing as I wasn’t sure how to cope with all the kitsch and the girls on stage didn’t look well-acquainted with their instruments. But they were smiling alright, which by then was giving me the full-on creeps. The whole place was starting to make me uncomfortable, really. After they turned off the disco ball, we left through the row of still grinning faces, and I was relieved once I made it through the gauntlet.

Now, I know I don’t paint the best picture, but I’d still recommend people to go because, well, it makes for a good story. And sometimes you need little bits of weirdness like that to keep a healthy diet.